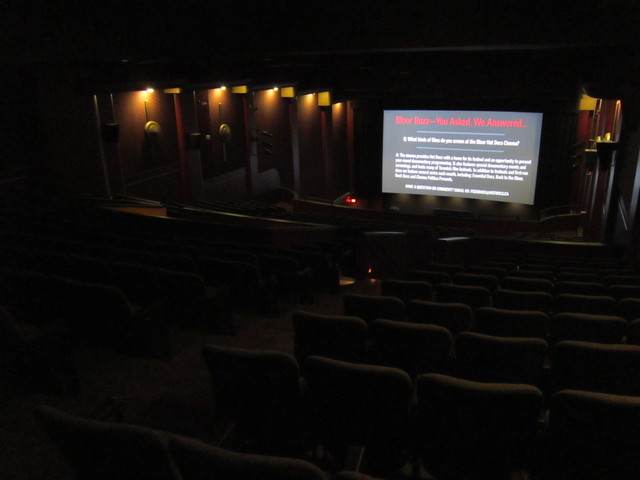 Opened as the Madison Theatre on December 23, 1913 with the feature “Alexia’s Strategy”. It was renovated in the early-1940’s and in 1943 it was known as the Midtown Theatre. In the 1970’s it was operating as the Eden Theatre, screening censored adult movies. On March 16, 1979 it was renamed Bloor Cinema becoming a first run theatre. The 997-seat Bloor Cinema has been in operation ever since and later became a repertory cinema.

In March 2012 it was renamed Bloor Hot Docs Cinema after a $3 million renovation It is now a premiere cinema for the Hot Docs International Film Festival, and also shows regular first-run and repertory programming. Thea seating capacity has been reduced to 727.

Not only did they set the scene by showing an exterior shot, but also Erica and friends inside.

The episode in question is available on online, with advertisements, for Canadians, here—> View link

The official Bloor cinema website is back online the address is:

Please update the link in the description above.

A two part 2006 documentary on the history of the Bloor —

Hey all, the Bloor’s correct opening date is December 23, 1913 (as the Madison). You can read a little more about it at my site Silent Toronto.

I enjoy your site, Eric. Perhaps you could shed some light on an puzzle that has intrigued me and others such as Jon Lidolt for some time. It is known that this theater was born as the Madison, then became the Midtown, and then the Bloor Cinema (along with at least two other names at various points). Looking at the pictures of the theatre over the decades, we wonder when (if not how) the theatre’s faÃ§ade changed so radically from its appearance as the Madison, with its stately lower facade, its arched cornice, and bay windows to the rather dull street face it has now and from at least the Midtown period. It is as if that grander original faÃ§ade was ripped off and replaced with the dull brick front which it now sports. I have always wondered if this is what happened or if perhaps a new building housing the entrance was built, probably in the 1940’s. (See the comments above from June 26, 27, and July 2, 2009 and pictures that are linked to in a number of the comments).

Sometime in 2008, The Bloor held the premiere of “My Dinner With Jimi”. A film by Howard Kaylan, lead singer of `60’s folk rock group The Turtles. The film chronicled the night in London he met Jimi Hendrix & The Beatles.

Incidentally, Howard Kaylan was in attendance at the premiere & answered audience questions. He thanked the Bloor staff & the press for their reception on his official website.

Eric Veillette, on one of the articles he later wrote for his Silent Toronto website, did unravel the mystery of why the Midtown/Bloor’s facade looks so different from that of its earlier incarnation as the Madison. The current theater is a essentially a new structure built in 1940 and opened in 1941. Only some outer sidewalls from the Madison were retained. The article is here: http://silenttoronto.com/?p=2035

The theatre switched from running censored pornography as the Eden to first run movies as the Bloor on March 16, 1979. It later became a repertory house, while retaining the Bloor name, and that is how most Toronto cinephiles remember it most fondly.