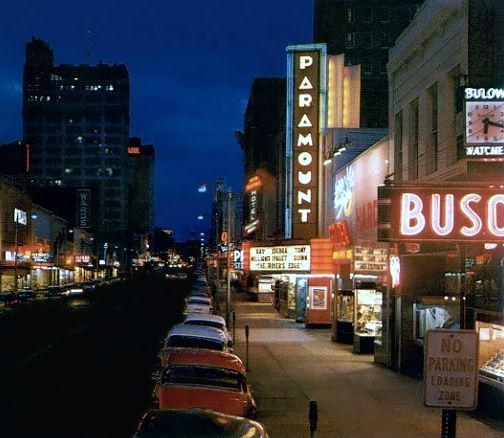 Saenger Amusements opened its Paramount Theatre on Capitol Street in downtown Jackson on February 11, 1938. It was in elegant Streamline Moderne style. The facade featured a large vertical sign against a gleaming white concrete wall. The lettering, in stylized Moderne style, were illuminated with neon. The rather plain triangular marquee was also illuminated by neon. Seating was provided for 1,091 in the orchestra, 288 in the Loge and 289 in the balcony.

The Paramount Theatre closed in the late-1970’s, and was demolished afterward.

Yes, unfortunately, the Paramount was demolished in the seventies I believe in order to build an office building and semi-complex. Many wished that Jackson’s leaders had had the foresight to preserve the theater and refurbish it for special vintage movies, plays, and concerts as other cities have done.

If you want to know why Mrs. Legler was awarded $254, you’re going to have to pony up the five bucks for the rest of the article:
http://tinyurl.com/yhuvmv

In 1968 the paramount was completly renovated with a new concession stand, turnstiles replaced ticket takers and the vertical sign along with the v-shaped marquee were removed and replaced with a flat reader board. The new was not better.

The final film that played at the Paramount was ADIOS AMIGO! Kind of fitting and sad.

How could a city like Jackson tear down such a beautiful movie House.So many towns large and small were doing it.Thank goodness in my hometown of Augusta,Ga. Civic and Art lovers saved Three Downtown Theatres! Jackson should have done it too.

The Boxoffice article Tinseltoes linked to says that the Paramount Theatre was designed by Jackson architect R. W. Naef.

An article called Movie Theaters in Twentieth-Century Jackson, Mississippi, by Jerry Dallas, says that the Paramount was initially planned to have 800 seats, but the capacity was cut to 668 by the time it opened. The Boxoffice article claims a seating capacity of 1,800, and says that the auditorium was 76x125 feet. A 1960 view at Historic Aerials confirms that this was a very large theater, and I suspect that Boxoffice was closer to the truth than Dallas was. Perhaps the house was intended to have 1,800 seats and opened with 1,668, and Dallas lost a digit from each number.

An AIA survey form filled out by R. W. Naef’s office lists the cost of the Paramount Theatre project as $200,000, and in Mississippi, in still-depressed 1938, that would certainly have bought far more than a 700-seat theater. Also, the Boxoffice photo shows a foyer and lounge much too spacious for a small house.

My apologies to Jerry Dallas. He did say that the Paramount was originally intended to have 1,800 seats but opened with 1,668. It was not his error, but the fact that I was reading the Google cache of a PDF which failed to render the numbers correctly.

Circa 1958 photo added courtesy of the AmeriCar The Beautiful Facebook page.