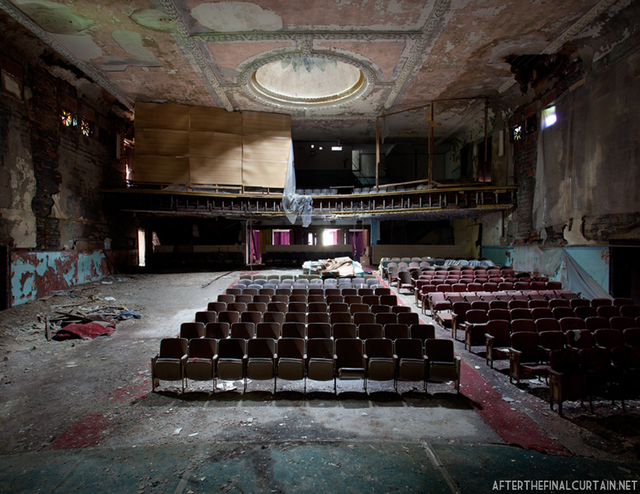 With it’s impressive terra-cotta front, the Basil’s Broadway Theatre is located on the East Side of Buffalo. Located at 516 Broadway Street, near Jefferson Avenue, it was originally built as the Sattler Theatre for department store magnet John G. Sattler, and designed by architects Henry L. Spann and his brother William T. Spann.

It was opened in 1914, at a cost of $35,000 and replaced the older wood frame Casino Theatre on it’s site. The theatre was a movie theatre right from the beginning, and didn’t have a stage.

The Sattler Theatre didn’t last long, as around 1920, the theatre changed hands and was renamed the Broadway Theatre. A Marr and Colton two-manual organ was installed a few years later. At some period of time, a small stage was installed and it presented vaudeville and movies.

Some years later two brothers, the Basil’s, took over operation of the theatre and it was once again renamed, this time to the Basil’s Broadway Theatre.

The Broadway Theatre was closed in 1965, and became Mohammed’s Mosque 23, which was visited by Malcolm X and Mohammed Ali. It became God’s Holy Temple from 1976 to 1984. It then became the Joy Temple Church from 1987 to 1996. Since then the building has remained empty and unused.

The Broadway Theatre was purchased by the Western New York Minority Media Professionals(WNYMMP) in 2008. Plans are progressing to restore the theatre for use as a multi-media performance space. They have applied for National Register status.

Contributed by Bway and Lostmemory
Get Movie Tickets & Showtimes

LOUB: I just received notice of this article through a local Buffalo friend’s email. I, too, made note that the new owners envision showing movies again. I wish them well as this theatre deserves to be saved.

LOUB: Send me an email () and I will give you the name of the Buffalo friend as you just might know him if you are in the Buffalo area.

The above site has an update on the theatre restoration.

Any update on any restoration on this theater?

I just heard recently that 2 men want to restore the theater. I don’t know what type of use they have in mind though.

Here’s a blog post with some images of the Sattler. Sattler Theatre

There’s a “Board & Paint” event Sunday, 8/20/17 to re-secure the theatre. The Buffalo Young Preservationists posted the info on Facebook, along with a new set of photos (the interior is pretty far gone now, a combination of vandals and the elements). Don’t know how to link the post here.

The interior of the theater looks like it’s in pretty much the same condition it was when I visited it in 2011. Glad to see someone is doing something with it, even if it’s just sealing it up.

Here’s the link to the event:

Broadway Theatre Board and Clean Up

Listings ended in 1965 for the Broadway theatre in the Buffalo News.