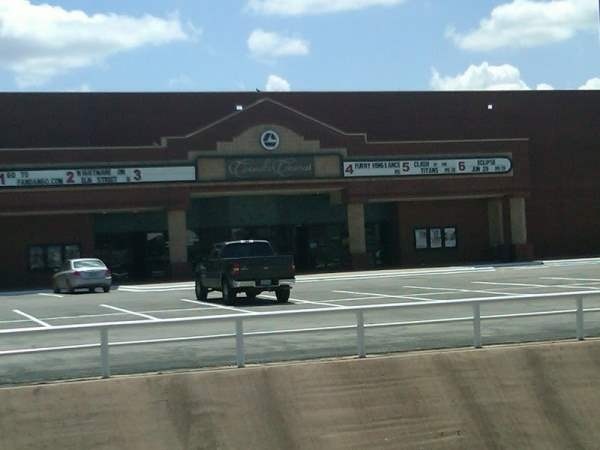 The Park Central 6 opened May 23, 1986 by Cineplex Odeon seating 1,480. It is a block brick building that has been painted a gaudy burgundy color with white trim. It has a large canopy over the entrance and a flat attraction panels along the front with the Carmike logo in the middle. The canopy and the columns under it are trimmed in white like the upper portion of the building.

It has a nice sized lobby and concession area but the auditoriums are small and cramped. It does have stadium seating and excellent sound. It taken over by AMC Theatres in March 2016. It was closed May 3, 2018.

I just saw a picture of this theater on cinema tour theater#4643 View link To me it looks like an old general cinema from the outside. I might be wrong though.

Correction, Chuck Van Bibber, This was opened by Toronto’s Cineplex Odeon in the late 1980’s and sold to Carmike in 1995. The numbers at the sign are typical for Cineplex Odeon at the time. It has the similar appearance as the Carrefour Laval Cinema (Near Montreal) that was closed and demolished in 2001.

Boxoffice of December, 1984, said “A new Plitt Cinema Six will open in late spring of ‘85 in the Park Central Shopping Center on the Winters Freeway at Southwest Dr., in Abilene, Texas.”

As I recall, Odeon swallowed debt-ridden Plitt in late 1985 (and almost choked on it. MCA had to bail them out.) I can’t find the actual opening date for this multiplex, but it’s possible that the project was delayed due to Plitt’s financial problems at the time, and that it wasn’t completed until after Odeon took over.

If there was a long delay in the project, Odeon would probably have had the design reworked, too, accounting for the similarity to the Montreal house Mike Rivest mentioned. Through the 1980s, architect David K. Mesbur headed a team that did all Odeon’s designs in-house, for both new and remodeled theaters.

Grath Dubinsky was at the opening