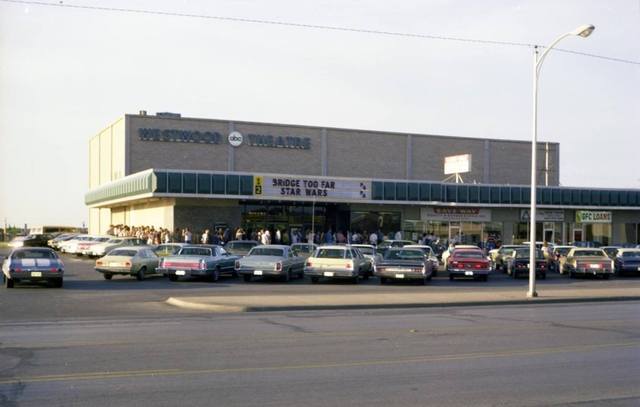 Located on N. 1st Street at Willis Street just off Highway 355, The Westwood Theatre opened on July 28, 1966 with “Stagecoach”. It was a single screen house seating 800. The Westwood Theatre was twinned July 1, 1977 when it featured “A Bridge Too Far” and “Star Wars”. It is a very pleasant and well maintained theatre. It has a large rectangular marquee over a blonde brick building. It is more or less the anchor of the small shopping plaza that it is located in.

The front walk is unique in that it is a terrazzo, and highly polished marble granite lines the lower portion of the front of the building. A large double window box office to the right side of the entrance.

The lobby is nice even though it is small. The auditoriums are narrow with eight seats on each side of the center aisle. One auditorium is done in a burnt orange and one is done in yellow. The walls are lined with sound draperies in these respective colors. The floors of the auditoriums are sloped for rather good site lines. The seats are comfortable but seem to be the original seats. (No cup holders).

Great sound and all in all a visit to the Westwood Twin is really an enjoyable night out to the movies. It was closed November 15, 2014.

I think the Westwood opened in the early 70’s as a single theater, and was subsequently split. I saw Star Wars there many times (1977). A few of us in the local astronomy club brought telescopes to the theater a few times to show various sky sights to the crowds as they exited from Star Wars. The news even showed up to cover it once.

I can’t tell you when the Westwood opened, but I saw Paper Lion there in October 1968. I saw 2001, A Space Odyssey there and I was very impressed with the magnetic stereo sound system. I still think Hal’s voice was in the surround speakers. Paint Your Wagon was another great magnetic stereo presentation. I was always amazed that Funny Girl, Hello Dolly, Fiddler on the Roof and Ben-Hur weren’t stereo. I believe the theater was part of the Interstate chain as was The Paramount. When the Westwood was twinned the screen was acquired by a Cooper High School teacher to be installed in the school auditorium.

The Dallas Public Library’s Interstate Theatres Collection includes 16 sheets of plans for the Westwood Theatre by architects Bridges, Campbell & Associates, dated March 24, 1966. John M. Bridges, Jr and George F. Campbell, Jr, were the principals of the firm, according to the 1962 AIA Directory.

The Interstate chain opened the Westwood in 1966 and they closed the Queen downtown at the same time.

The Westwood theater should now be listed as closed and for sale. The movie house opened in 1966, meaning it’s 50th anniversary would just be ahead. At the time it opened, moviegoers could choose from the 4 downtown theaters, (The Metro, The Majestic, The Paramount and The Queen). The Interstate chain closed The Queen down on the day before The Westwood opened. Sonny and Cher came to The Westwood in April 1967 as part of a Texas tour for their movie, “Good Times”. It was twinned in the summer of 1977. In the last several years it became a bargain cinema. You could get in for less than $2.00 and get a large bucket of popcorn for $5.00 with a free refill. True the seats were falling apart and the sound and projector broke down a lot, but it made for a cheap date. Later in 1969, National General Cinema built a theater in the Westgate shopping mall. Shortly after that, The Radford Hills 3 was built and a Jerry Lewis Cinema, causing a glut of theaters for a town the size of Abilene. The Westwood officially closed November 15, 2014. I attended the Westwood most of its theater life and am saddened to see the old girl go. Hopefully someone will invest in it and give it a new life.

Cineplex Odeon closed it in early May 1988. Article posted

Saw “The Exorcist” here in the 70’s while stationed at Dyess AFB. It was single screen then and packed every weekends with movie goers. It’s sad to see these vintage locations closed now and or converted to churches.

Current function should be church.