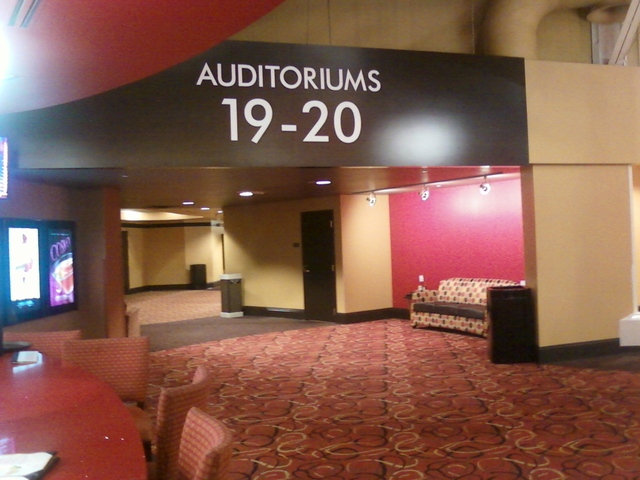 The auditoriums are designed in an old Art Deco style theme, and although completely modern, have sort of a feel of old style theatres. It has stadium seating with almost like couches, where you can pull up the handles and stretch out if the theatre is not full. It has awesome THX Surround Sound and Sony Dynamic Digital Sound and it’s one of the most comfortable theatres to sit in.

It’s a great place to take in a movie when you get stuck with a rainy day while in Orlando. It was renamed AMC Disney Springs 24 in 2015. By 2020, dining facilities and recliner seats had been fitted and the total seating capacity was reduced to 3,496.

What does AMC stand for?

If anyone comes across any pictures from these theaters in (what I consider) their hey day in the early 90’s, please post them. I can remember how beautiful the center atrium was, when it was open into it’s full length, and there were banners hanging from the rafters for movie premieres that had taken place there. I used to see multiple movies there almost every week of the year. Sadly, even still living just a few miles away, that’s slowed to almost never with the theater now forcing you to pick specific seats, and pre-selling said seats. I used to just show up early, buy a ticket, and sit where I wanted. Now everything is sold out weeks in advance in the areas of the theaters that I like, and I can’t even get a ticket. But AMC Pleasure Island (as is used to be called) was my 2nd home for several decades.

Please update, total seats 3496 (due to dine in converted to recliners and lost of seats due to Dolby Cinema).

The ETX theatre was the first for AMC, and was installed in Auditorium 1. It is now a Dolby Cinema theatre, as mentioned earlier.

Contrary to the description, it opened on December 16, 1988, with TEN screens. Its opening movies include The Naked Gun: From the Files of Police Squad!, Tequila Sunrise, My Stepmother is an Alien, Cocoon: The Return, Dirty Rotten Scoundrels, Scrooged, Rain Man, Twins, Oliver & Company, Santa Claus: The Movie, and Ernest Saves Christmas (which was filmed at the Disney-MGM Studios not too far away). When it expanded to 24 screens on July 3, 1997, its opening movies include Men in Black (on five screens), Hercules (on three screens), Con Air (on two screens), Batman & Robin (on two screens), Wild America, Face/Off (on three screens), The Lost World: Jurassic Park, Out to Sea, Speed 2, and My Best Friend’s Wedding (on two screens).