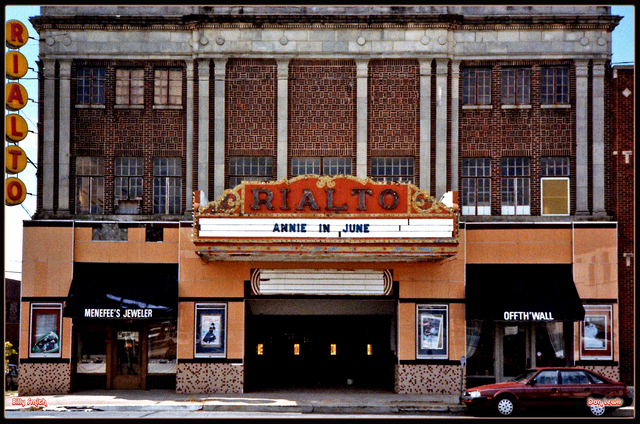 Built on the site of an earlier Rialto Theater (1921-1928), the Rialto Theater opened in 1929, with seating for 1,400, originally presenting both live stage shows in addition to movies.

If I rest, then I have to work. This is my excuse not to work. Don’t interfere.

A 1986 view of the Rialto Theater in El Dorado.

I can’t find any current showtimes, but that’s not always definitive.

If you scroll about a quarter of the way down, there is an interesting treatise on the Rialto and some other El Dorado theaters here. It’s the first article in Volume 2 of the journal.
http://tinyurl.com/6yk6ej

Here is another photo:
http://tinyurl.com/lrrrva

According to the current Google Street view, the Rialto is now open as a live music venue. Karaoke featured every Wedneday night. Could not find a website listing for them though.

The Rialto has been purchased by a non-profit to be remodeled / expanded to be the centerpiece of a new downtown theatre district in El Dorado. Think Shakespeare and such. Tentative plans are to open for business summer of 2015.

Status should be closed. No listings on net and Facebook page is down.

The Rialto Theater is currently under renovation (2018) by the Murphy Art District of El Dorado, Arkansas. The Rialto was built on the same property of an older building, also named, the Rialto. The building now standing opened in 1929. It provided the town with one screen and a balcony, typical of that time, along with an organ to accompany the movies of that era. The original box office is on the front outside of the lobby, in a beautiful covered mosaic tiled mezzanine. There are several entry and exit doors made of mahogany and beveled cut glass. The front of the building is adorned with a splendid, one of a kind neon and metal marquee. The interior is magnificent and has withstood the test of time. There are 3 staircases. One, circular, winding upwards to a second story lobby, the balcony, and restrooms. Another is in a more conventional shape going to the balcony and upstairs lobby. Both are carpeted. The 3rd is a wooden staircase going up towards the projection booth. The theater also has an orchestra pit and actor dressing rooms for live shows of the time period. The first floor of the seating area is slanted and made of concrete. In 1974 South Arkansas Amusement Co. owned by L.B.Clark and James McWilliams of El Dorado, AR sold the theater and the Sky Vue Drive In, also owned by SAA to James H. Riley of Union Cinema Corp. UCC began operating the theater on January 1, 1975, until the late 1980’s, when the hay day of historic theaters began to decline. Later it was sold again to Richard Mason of the El Dorado area. The original carbon arc projectors, which at the time were approximately 60 years old, were replaced with modern equipment. Also the balcony was divided, so that the theater contained 3 screens in total. The original water tower cooling system was replaced with more modern equipment. And the roof received a much needed repair. This beautiful building is listed on the National Register of Historic Buildings. There are numerous photo’s of the Rialto and it’s interior available from various sources online. It clearly is, the most magnificent historic building in the town of El Dorado. We are extremely fortunate this building has survived and now to be restored, when so many across the nation no longer exist.