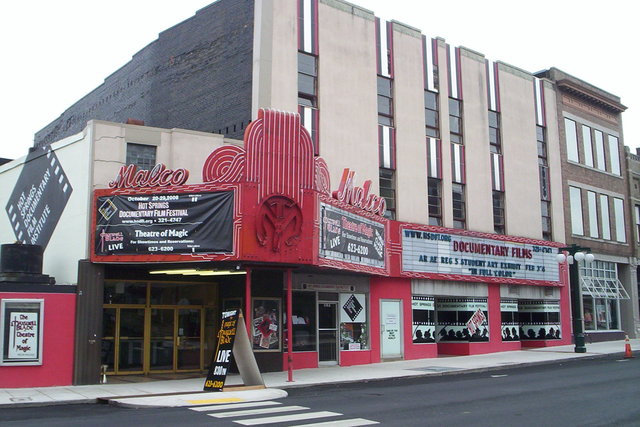 The Malco Theatre opened in 1935 in elegant Art Moderne style, including a fantastic large marquee with the Malco name in graceful script lettering and the stylized intertwined letters M and T for Malco Theatres on the front panel of the marquee. The facade features pale brick highlighted by various colored tiles. The main entrance is covered in candy apple red tile in the same color as the marquee.

Since 1996, the theatre became the setting for Blade’s magic shows. Later the Maxwell Blade Theatre of Magic, the former Malco Theatre, which was frequented by former President Bill Clinton as a boy, also played host to the Hot Springs Documentary Film Institute, as well as to ocassional film festivals. It had closed around 2015. It reopened for live performances and it was announced in June 2019 that movie screening would begin in September 2019.

Maxwell Blade has lost his lease on the Malco Theatre. He is a treasure that will not be forgotten…most children who have visited Hot Springs, as well as their parents, have been thrilled spectators of his magic. The Blades have performed as a family troupe, and the
genuine syncrinicity of husband-wife-children has been an inspiration to so many. Maxwell will be performing a one-man-show…more personal, at the “Poet’s Loft”, (also on Central Avenue) at Hot Springs, until the completion of new accomodations. Like the aforementioned Malco Theatre, his home in performance for the past thirteen years, the Poet’s Loft has a mysterious atmosphere that will be very compatible with the new venue, which will be more along the lines of “Street Magic”. Maxwell Blade has been the representation of theatre magic in Hot Springs, Arkansas for over a decade, and has not lost his edge! (NO PUN INTENDED)
Evon Champion, DeQueen, AR

1989 views of the Malco here and here when it was still operating as a movie theater and showing “Scandal” and “Star Trek V” at the time.

Boxoffice Magazine of May 25, 1946, has information about the Malco Theatre, but it doesn’t match up with the current intro on this page. An architect’s rendering of the facade shows that it is the same building seen in the various photos linked from comments above, but the text says that the house opened on February 22, 1946, not in 1935.

The theater was originally called the Malco Music Hall, and was designed by the Little Rock firm of Bruegeman, Swaim & Allen. As originally configured, the theater ran through the block and had entrances on both Central Avenue and Broadway, each with its own boxoffice, lobby, and concession stand.

Confusion about the opening year might have arisen from the fact that Malco Theatres entered the Hot Springs market in 1935. However, there is also the fact that it took the company a long time to get this theater built. The earliest mention of the Malco Music Hall I’ve found in Boxoffice appeared in Al Henderson’s “Dixie Doin’s” column in the issue of December 9, 1939. Al said that Malco had begun construction on the new Music Hall, but that they did not expect the house to be completed until late 1940 or early 1941. The estimate proved overly optimistic.

At the end of 1941, Malco was still trying to get the house built, when the December 6 issue of Boxoffice paraphrased local Malco Theatres manager W. Clyde Smith as indicating that the Malco Music Hall would be built on the site of the former Princess Theatre, provided materials could be obtained. We all know what happened the following day: a delay that would live in infamy, as it were. Whatever the cause of the earlier delays, the onset of war kept the project on hold four more years. The 1946 opening given by Boxoffice is undoubtedly correct.

Incidentally, architects Bruegeman, Swaim & Allen designed at least two other theaters (a house at Princeton, Kentucky, for Malco in 1938 and the Ritz at Malvern, Arkansas, the same year) and the successor firm of Swaim & Allen at least one (a house for Malco at Camden, Arkansas, in 1948.) The firm has at least two buildings on the National Register of Historic Places, but neither of those is a theater.

It looks like the Bruegeman, Swaim & Allen-designed theater in Princeton, Kentucky, I mentioned in my comment above didn’t get built. Issues of Boxoffice from late 1937 and early 1938 cite Malco’s plans for the house, but a late 1938 article says that the Crescent Amusement Company had acquired the Savoy Theatre in Princeton from Malco, which apparently pulled out of that market. Crescent demolished the Savoy in the spring of 1939 and built the Capitol Theatre in its place. I can find no indication that BS&A designed the Capitol.

Additionally, I find that the national Register of Historic Places uses two different spellings of the first architect’s surname: Brueggeman and Bruggeman. Boxoffice uses Bruegeman consistently, but then Boxoffice is not always the most reliable source for correct spelling.

Cinema Tour attributes a Park Theatre in North Little Rock to “Bruggeman, Swain & Allen” but that looks like two spelling strikes to me. For now I’m inclined to go with Brueggeman, as that’s the way it’s spelled in this PDF of an article published by the Arkansas Historic Preservation Program. This article also attributes the Park Hill Theater (as they call it) to the firm. It also gives the architects' names as Edward F. Brueggeman and Guy W. Swaim. So far I’ve been unable to discover Mr. Allen’s first name.

Local paper covers the February 21, 1946 grand opening of the Malco Hot Springs Theatre costing $100,000 with those attending including Malco President M.A. Lightman and Malco Music Hall manager W. Clyde Smith. Some pictures of the Feb. 21, 1946 evening are posted in photos if interested.

The Hot Springs Documentary Film Festival sold this building to a developer in 2013 and is no longer using it as a venue. The Blade Magic show also moved out that year to a storefront operation further down Central Ave. It would be safe to say status is “closed.”

Presently (April 2016) the auditorium has been gutted to its original state but very little decor remains. A group is involved in trying to restore and open it. Much of the lobby and foyer is intact along with the staircase and the “colored” entrance and separated balcony are also intact. It has a very shallow stage and at least two samples of vintage carpeting. Any other photos of the auditorium are being eagerly sought by this group. If they can be posted here, they have the link to this page.

The Hot Springs Sentinel reported today that the Malco will resume showing movies in September. It is also currently home to the Michael Blade magic show. It’s not closed any more and it looks great.