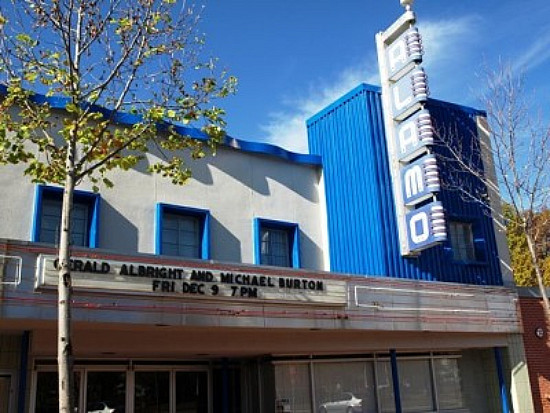 By 1983 everything came to a halt and the Alamo Theatre closed. It remained shuttered until 1992. A community restoration came about in the hopes of reviving the neighborhood. Fortunately the exterior was still in good shape and therefore the plasterwork, windows and corrugated white metal were easily restored.

Inside, everything was in shambles with the ceiling and other junk a foot and a half deep on the floors. Nothing could be salvaged. The restoration decided to go from scratch and restore in the interior to its original Art Deco style.

The marquee and the vertical sign were restored to their original design including all the neon. It took over two years to complete the project and the theatre re-opened in 1997. It is now hosting all forms of art, music, dance and theatre.

Charles: Great photo of the Alamo. I’ve been looking at the LA and MS CT theatres and wonder which ones, if any, survived? I don’t know the name of the theatre pictured on AOL news that ‘was’ in Bay St. Louis MS, but sadly the brick structure was leveled.

Would love to see an interior photo of this art deco cinema in MS.

Chuck: I figured it probably had been closed for some time yet it was sad to see it gone. It would be nice to see it included on CT though.

Can anyone tell us the condition of this theatre in Jackson MS after Hurricane Katrina?

The 1917 date on the draft card predates, by 25 years, the 1942 opening date described in the above history of the theatre.

Well, five minutes after my question, I came across another history description of the Alamo Theatre on another web site.
http://www.visitjackson.com/view.php?eid=616

It States,,,
The first structure was located on Farish Street in the 100 block across from where McCoy Federal Building now stands. The second Alamo was located on West Amite Street at Roach Street. This newly renovated structure (the third) was built in the early 1940’s in this Farish Street Historic District.

Here is a marquee photo:
http://tinyurl.com/y96nwu4

Well, Hello all! My name is Shawn Smith and I am the manager @ the historical Alamo Theatre. For information, tours or booking please call the theatre at 601.352.3365! I look forward to all of your calls. BTW, if you are on FaceBook, you can find us at the The Alamo Theatre. I post all upcoming shows there.

Oh, you can also reach me thru email….

The Alamo actually outlived all of downtown Jackson’s white theaters, lasting into the early 1980s, but it had closed by 1983.