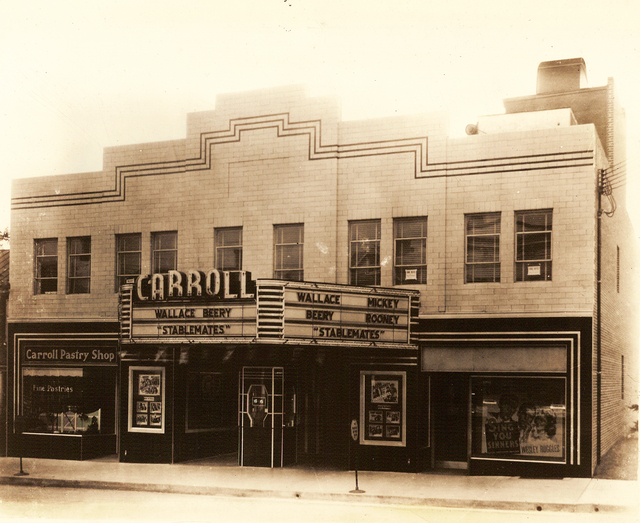 The Carroll Theater originally opened on Thanksgiving Day, November 25th 1937 at 2:00PM. It was fully decorated in the Art Moderne style with extensive decorative plaster work. The first films to be shown at the theater were â€œEbb Tideâ€ â€œStella Dallasâ€ and â€œTexas Trailâ€. The theater originally featured two small storefronts on either side of the lobby. A loan office and a hairdresser can be seen to occupied these spaces in a 1976 photo. There was no snack bar or concessions area in the original design, patrons would purchase candy at a candy store located directly across the street. Offices for the theater and the projection booth were located on a small second floor area over the lobby.

Sometime in the late 1960s to early 1970s the (exact date is unknown to me) the original neon marquee and ticket booth were removed. Sometime in the late 1970s (again exact date unknown, but it was after 1977) the theater was â€œmodernizedâ€. The once 850+ capacity seating area was spit down the middle. A significant portion of the stage area and front of the theater was walled over. and the first floor portion of the facade was stuccoed over. Nearly all of the original art deco decorative interior elements were removed. The plaster proscenium arch, cornice work and pilasters in the theater space were thankfully preserved when sound proofing fabric was hung overtop of it. The only other decorative element to survive the renovations was the lobbyâ€™s magnificent plaster cornice, which was preserved when a suspended ceiling was hung over it.

The theater continued to operate as a duel screen theater until the construction of the Regal Cinema 6 at nearby Cranberry Mall in 1988. At this time the Carroll Theater was closed and all of the reaming projection and sound equipment was removed. The building was sold to a local church that used it as annex Sunday school facility and warehouse.

During this time the building was severely neglected and in 2000 on the verge of complete dilapidation the building was sold to the city of Westminster. Original city intentions were to demolish the building to make way for a public parking lot. Luckily a group of local residents stepped in and convinced the city to renovate the facility for the good of the community in 2002. Under the leadership of the Carroll County Arts Council the building was fully restored as a community arts center. The wall through the center of the theater was removed.

Approximately one third of the rear of the original theater space was walled off and divided into two floors. The theater plaster work, which had suffered water damage from a leaking roof was restored and painted a period accurate (though not original color scheme). The former store fronts were turned into staff offices and patron restrooms. The second floor offices and projection booth area were tuned into two classrooms. The two story addition occupying part of the original seating area was used to create two art galleries. The lobbyâ€™s plaster cornice, which had been hidden under ceiling tiles, was repaired and repainted in the original color scheme. All other walls and floors in the building, except for the green terrazzo floor in the lobby, had to be completely replaced due to extensive damage.

Due to extensive damage and new codes, all remaining original theater seats were removed and replaced with 263 new seats. A modern stage lighting and sound system was installed and the stage thrust area was enlarged to better suit concerts and drama productions. Due to budget constraints a new 35mm projection system was rejected in favor of a digital video projection system. The theater was also equipped with a retractable screen to allow for mixed use of the stage. A new neon marquee, (the current marquee is not the original) reminiscent of the original was installed and the facade was restored to much the way it looked in 1937. On April 4, 2003 after more than a year of renovation the building was reopened to the public under the new name of the Carroll Arts Center.

Today the building is managed by the Carroll County Arts Council and serves the community as a home for gallery exhibits, drama productions, concerts, movies, and classes.

So they beefed up support for the new marquee with columns, and changed the angles of the sides.
The first of the two B/W photos in Lost Memory’s May 29th post, looks like it’s plucked right out of “It’s A Wonderful Life”. Downtown Bedford Falls. Nice!
The second `70’s B/W pic shows a possible 2nd incarnation of the marquee, from that of the 1938 pic.

It’s good they went back to a classic marquee shape during the renovation.