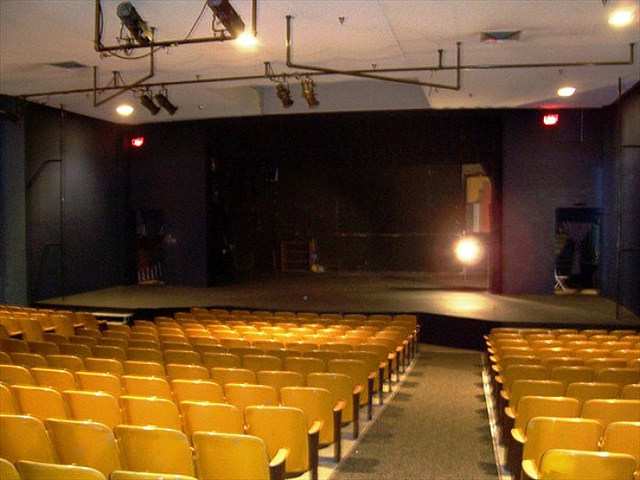 This theatre opened on December 5, 1939 as the New Fox Theatre with 710 seats. The theatre got a new name in 1960, the Trojan Theatre. It was playing first run features until 1984 when it switched to an art house policy. It closed two years later.

It was purchased by the Longmont Theatre Company in 1990 and then converted to live performances. It has been fully restored to its beautiful Art Moderne style. It was given Landmark status in 1991.

Just wanted to clarify, this theatre only has 287 seats. Small yet effective.

Boxoffice of September 16, 1939, said that Fox Intermountain Theatres had begun remodeling a building in Longmont for use as a theater. The project was to cost $60,000.

Also, I have to question the attribution of the design of the theater to the Skouras Brothers. Spyros Skouras certainly dictated the look of Fox theaters during this period, but I’ve never heard of any of the Skouras brothers actually being a designer. Spyros undoubtedly had a lot to say about the choice of architects and decorators for the various Fox houses built or remodeled during his tenure, but I’d be very surprised to learn that he or his brothers ever wielded the pencils themselves.

The 1941 item names George Frantz as chief of design and construction for Fox Theatres at the time of the Longmont project, and attributes the idea for the house’s suspended, circular projection booth to him. I don’t think Frantz was himself an architect. A few issues of Boxoffice refer to him as a “theatre engineer.” He apparently left the details of design to the various architects, such as Mel Glatz and Carl Moeller, who Fox either contracted with or employed in-house over the years.

Currently trying to raise funds to be able to start showing movies again.

Based on a fragment of the June 15, 1959 issue of Motion Picture Daily, the Fox in Longmont was sold that month by Fox Intermountain Theatres “to Robert Smith of Denver, who formerly operated houses in Steamboat Springs and Oak Creek”.

Boxoffice, Oct. 10, 1960: “Richard Klein, former general manager of Black Hills Amusement Co. … has purchased the Fox Theatre in Longmont, Colo. … and will take over the theatre there November 1.”

Boxoffice, Nov. 14, 1960: “Dick Klein … has taken over the operation of the Fox Theatre at Longmont, and has renamed it the Trojan.”