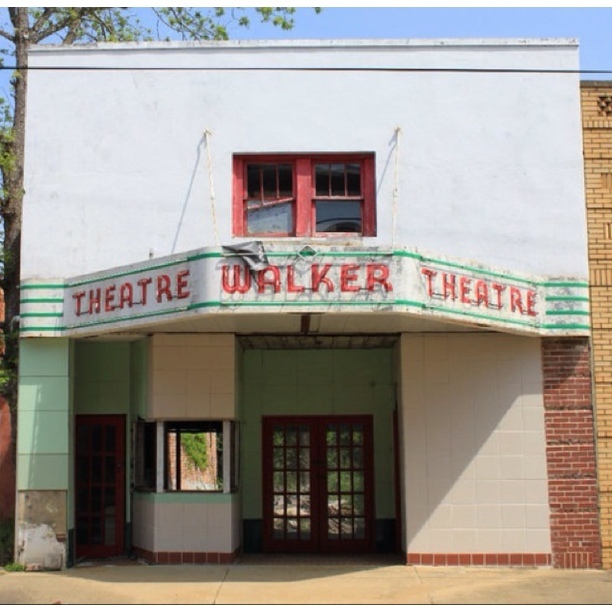 Originally opened as the 300-seat Lyric Theatre. This small theatre was remodeled as the Ritz Theatre. In 1936 it was renamed Ritz Theatre, but was soon renamed Walker Theatre. It played movies through 1963 when it closed. Restoration on the theatre started in 2004. It will become an “open air” theatre with only a third of the building having a roof.

The front exterior and small marquee have been restored and the neon lights are again shining brightly.

The October 13, 1936 issue of Film Daily ran an article that listed 22 theater projects either recently completed or underway in Georgia. A project was listed at Fort Gaines, but it was called the Ritz. The owner of the house was Ellison Dunn. The April 13, 1936 issue of Motion Picture News also mentions Mr Dunn:

“ G. M. Coleman has sold the Lyric, which he operated in Fort Gaines, Ga., for 20 years, to Ellison Dunn, who will rebuild it, and rename it the Ritz.”

So where did the name Walker come from? The 1964 obituary of Mrs. A. E. Walker, the former Bessie Dunn, gives this clue: “Mrs. Walker moved to Fort Gaines from Blakey in 1936 and became owner and operator of the Walker Theatre, Ft. Gaines and the Archie Theatre, Abbeville Ala., members of the Dunn family theatre chain.”

The 1926 FDY lists the Lyric Theatre at Fort Gaines with 300 seats. The MPN article doesn’t say that Mr. Dunne’s rebuild of the Lyric was a complete teardown, and as the Walker was the same size it seems likely that the house was just gutted, at most, and given a new front.