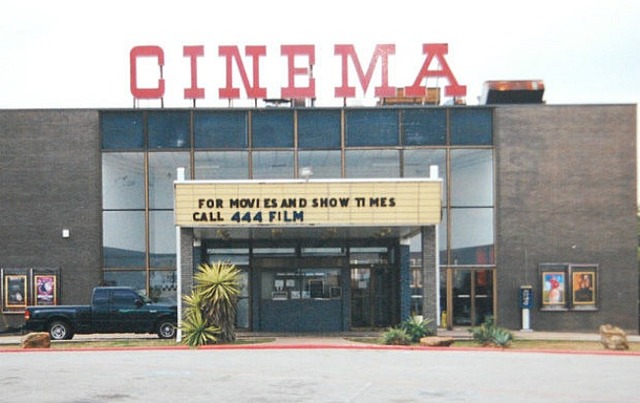 Opened by GCC on May 26, 1966 as a 1,200-seat single screen. Converted to a twin in 1976, which were later subdivided to make it a four screen theatre from 1992. A red brick front with a blue tile around the front entrance. A double window box office with doors to each side. The lobby was done in a black and white checkerboard both on the floors and the walls.

The Park Plaza Cinema closed on February 28, 2002 and was boarded up until 2008, when it was demolished.

Yes, I loved this theater. By the layout, you could tell it was built as one screen, but had been turned into two screens by the time I started going there. I saw many movies here including My Bodyguard, The Survivors, The Stewardesses (yes that movie) and many others. I used to ride a bike to get there. The neighborhood was pretty old and worn out at that time, but this theater was a great place to go.

It’s gone. They tore it down, because of the crack head infestation. They were breaking in to get high. It’s a shame too, cause it had potential. I wanted to renovate it, but they say it would have been $80,000.

Here is a photo:
http://tinyurl.com/y6laa7o

The Park Plaza shopping center opened without a theater in 1959. In 1965, General Cinema announced its 1,200 seat theater that would be added to the north side of the property and the center would continue with additional properties to the east. The delayed project came to fruition with theatre’s grand opening was May 26, 1966 with a ribbon cutting and its first movie was “Harper” with Paul Newman. It was General Cinema’s 15th Texas theatre and fourth in the area with the Big Town, NorthPark and the Lochwood which had opened just one month earlier. Art gallery and smoking section which wasn’t uncommon for General Cinema locations into the 1970s.

Another common occurrence was to twin the single screen which GCC did with it, Big Town and the Lochwood. The theatre was under intense competition in the multiplex era when General Cinema dropped the theatre. The theater made it into the megaplex era and was operating as a discount house with each twin twinned to make it a four-screen house. It finally closed Feb. 28, 2002 with “Ali”, “Jurassic Park 3” and two other second-run features. I believe its operator then took over the nearby Festival (formerly the AMC Forum) in its final stretch. The theater was oddly excised from the shopping center leaving a hole between the north to south strip and the east to west strip of the Park Plaza as of 2008.

“Oddly excised” is right. I visited the site not too long ago, and you still see the footprint of the theatre, complete with sloping ground where the seats would be. There is rubble there, with some black and white tile from the walls. You can see the driveway that ran in front of the box office, too. The library is still there to the north, but what used to be a Dairy Queen on the south side of the theatre looks like it’s been a few other things, before it shut down as well.

I miss this place. Even though I was its caretaker for only seven or eight months back in the mid ‘80s, it was a cool building that smacked of style at a time when theatre construction was boxy and thoughtless. I wish I had done more for it, but I was only a nineteen-year-old GCC manager with a polyester blazer, and deluded ideas of what the job should be.

It’s exactly the kind of place that should have been renovated (with all of those silly interior walls removed to make it a single-screen palace), but as I can see from recent visits, the area is just crap.

As I recall, there was a similar, sister theatre operated by GCC at the time in Richland Hills, called Richland Plaza.