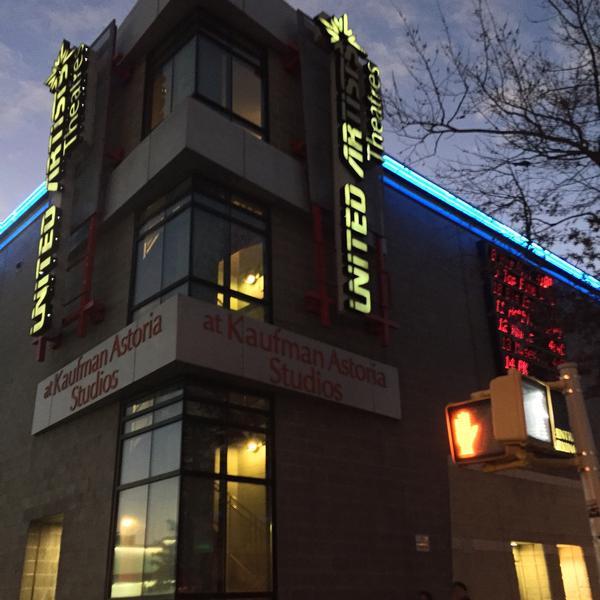 The building of the largest multiplex in western Queens eventually forced the closing of its nearest rival, the Astoria Theatre, which operated continuously for more than 70 years in the heart of the Steinway Street shopping district. Situated near the Kaufman movie studio, the multiplex was originally called the Regal Kaufman Astoria Stadium 14 when it opened on October 8, 1999.

UA, which took over in 2001 after Regal’s bankruptcy, dropped “Stadium” from the name in favor of “Cinema”.

UA also operated the historic Astoria Theatre, but shuttered that aged theatre to end the competition. It has since been gutted and converted to stores and offices.

UA, which took over in 2001 after Regal’s bankruptcy…

Although I too would love to think that UA took over Regal’s debt but alas that is not true. After acquiring United Artists Theaters in September 2000 and Regal Cinemas, Phillip Anschutz then purchased Edwards Cinemas. In late 2001 all UA theatres began to receive a memo concerning a merger and debt by-out of Regal, UA and Edwards. In the Spring of 2002 it was made offical.

Thus the sad tale of the multimedia merger…

I attend this theatre frequently, usually going in the afternoons to take advantage of the matinee prices and the relative quiet. I suspect these theatres are doing real well. It has spurred a renaissance in the immediate area. Several restaurants have opened since the megaplex arrived.

Boy is this area changing. I was there yesterday for KINGDOM OF HEAVEN and then I snuck into THE HITCH-HIKER’S GUIDE TO THE GALAXY and restaurants and other food & drink establishments are popping up. You know the area has “arrived” when a Starbuck’s comes and there is a Starbuck’s coming on 37th Avenue right across from the theatre.

It is amazing the economic engine this 14-‘plex has been. Thirty-Fifth Avenue is filling up with chain stores. Pizza Uno opened first. Then Starbucks. Than “The Cup” a faux-retro restaurant with a cool neon sign. And now Baskin Robbins. Thirty-Five Street was dead prior to opening of the 'plex. It should be good for AMMI to, diagonally across the street.

Since there’s no site on here for the theater at the Museum of the Moving Image, just blocks from the Kaufman Astoria Cinema 14, I figured I’d post it here. Ran in today’s Daily News.

BY NICHOLAS HIRSHON
DAILY NEWS WRITER
A potential Oscar-contending film about Idi Amin will be previewed tonight on an Astoria screen, more than a week before its heralded Sept. 27 nationwide release.

Acclaimed actor Forest Whitaker, who plays the infamous Ugandan dictator in “The Last King of Scotland,” will appear at the American Museum of the Moving Image after the critically acclaimed movie is previewed at 7 this evening.

The film’s director, Kevin Macdonald, and co-star James McAvoy who plays Amin’s personal physician, also will be in attendance.

A sellout crowd is expected to pack the museum’s 200-seat theater, and the actors and director will participate in a 30-minute moderated discussion following the movie, said David Schwartz, the museum’s chief curator.

“It’s a gripping film,” Schwartz said. “Forest Whitaker is a shoo-in for [an Oscar] nomination. There’s no way he’s not going to be nominated for that performan
ce.”

In the movie, McAvoy plays a young Scottish doctor named Nicholas Garrigan. Garrigan is sent to Uganda to treat a minor injury suffered by Amin, the mad dictator who ruled over the country in the 1970s.

Amin, obsessed with all things Scottish, hires Garrigan as his personal physician, and the doctor watches as Amin soon orders the torture of thousands of Ugandans.

McAvoy gained fame last year for his role as Mr. Tumnus the faun in “The Chronicles of Narnia: The Lion, the Witch and the Wardrobe.” This year, he will star alongside Christina Ricci and Reese Witherspoon in “Penelope.”

Macdonald, whose directing credits include a Mick Jagger documentary that aired on ABC in 2001, seemed excited about coming to the museum.

“I’ve heard a lot of good things about the theater and its reputation,” he said. “I’m thrilled it’s going to be there.”

Critics have hailed “The Last King of Scotland” as a masterpiece destined to rack up a number of awards.

Asked if the film could capture any Oscars, Macdonald said that “audiences seem to have loved it so far and I hope … the various organizations agree.”

McAvoy might receive a few nominations, and Whitaker is considered an early favorite to win Best Actor at next year’s Academy Awards, Schwartz said.

Born with a condition called lazy eye, Whitaker has gone on to have a very successful career. He starred in the films “Bird” (1988) and “The Crying Game” (1992), and directed the popular Whitney Houston film “Waiting to Exhale” in 1995.

Whitaker researched his role as Amin so well that he almost perfectly imitated the dictator’s mannerisms and personality, Macdonald said.

Tickets for tonight’s film and discussion are $16 for museum members and $22 for the general public.

Can someone help me get a job at this movie theater . I am 17 and looking for a job. I will go back to school soon graduate from H.S and will go to college. I need a job bad and I have applied everywhere. If you can help me call me at 646-353-3602.

Can anyone confirm 7.1 on this site? I saw FINDING DORY last night at Auditorium #1 and I could have sworn I’ve heard young, harrowing hellos from the back right surround IMMEDIATELY after the opening title.

Also, #1 isn’t the RPX screen, which has Dolby Atmos. It has a Sony 320 and Klipsch Professional speakers. Image was framed a tad too high with somewhat noticeable trapezoiding on the right hand side.

An affiliate of Kaufman Astoria Studios has purchased the cinema complex for $45 million from Forest City Realty Trust, according to a recent report: http://www.prnewswire.com/news-releases/forest-city-joint-venture-closes-sale-of-queens-entertainment-property-to-kaufman-astoria-studios-300282221.html