Almost a duplicate of the Loews on Little Road. The Loews Lincoln Square opened June 17, 1983. It was a dark red brick building with glass running from one side to the other on the front of the building. A large lobby with a 2' border running around the lobby ceiling featuring old and new movie posters. (One Sheets) Had a nice sized game room off the lobby. Loews closed the Lincoln Square January 2004 and it became a Movie Tavern, which only had limited success and closed.

It was demolished in February 2006.

This was trying to become a movie tavern and it never took off, the place was shut down and the whole building was knocked down in feb 06 and now its just a vacant lot

That’s too bad, this was a good theater. I think it originally opened around 1983 or right in that period. It was hard to find it, because it was tucked into an endless strip mall and the parking was often crowded, but it was worth the hassle.

The Loews Lincoln Square opened June 17, 1983. It was part of a movie theater building explosion in a market that only had 4 movie theaters with a total of 20 screens in a population of around 200,000 residents. The mid-1980s was the era of the multiplex and for growing Arlington, Texas, four movie theater circuits were vying for the same zones. The newly created Interstate 20 was creating a retail nexus in South Arlington with exits from Fort Worth to Grand Prairie housing new build cinemas.

After Loews opened its Lincoln Square in 1983, UA opened the UA Bowen 8 in 1984 along with the Las Vegas Trail 8, UA South 8, and UA North Star 8. Loews launched the almost-identical 6-screen 20 & 287 in 1984. The UA Bowen 8 would be joined an exit to the West by the AMC Green Oaks, yet another eight-screen operation. Finally, General Cinema would open its eight-screener, the Arlington Park Square, in 1986 a few exits to the east as South Arlington was replete the multiplexes.

The marketplace changed markedly with the birth of the megaplex area. Grand Prairie got two with the UA and Cinemark multiplexes and just an exit outside of Arlington was the UA Eastchase opening in 1997. When AMC opened it AMC Parks in 2002, the remaining 1980s theaters were in retreat mode. Loews closed January 4, 2004. Loews would then close the 20 & 287 on January 30, 2004 completing its leasing term there.

Grandbury-based Great Texas Movie Company came to finish out a short-term lease at the Lincoln Square while trying to get a liquor license as part of its Movie Tavern line of theaters. It failed to get the license and only had a month-to-month leasing agreement that it carried on for one full year. It decided against creating a kitchen closing permanently on January 30, 2004. The theatre was emptied and demolished soon thereafter. A Studio Movie Grill was built elsewhere in the plaza in 2017. 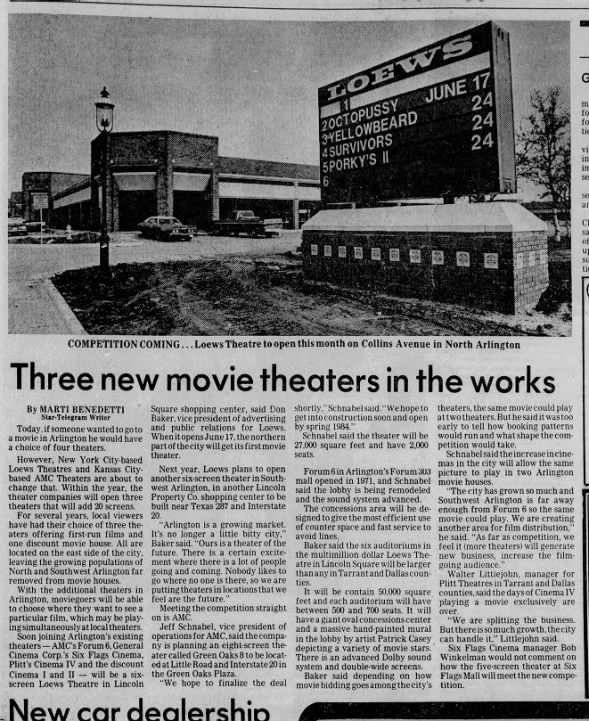