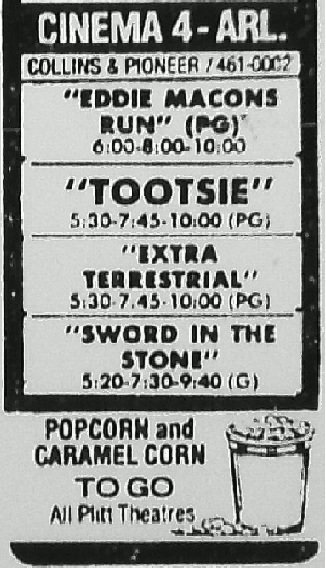 This four screen opened as the Pioneer Cinema on March 28, 1975 and seated 1,000. A very plain beige colored building on one end of a strip shopping center. The most striking feature of this theatre was its lobby and concession area. It was done in a black and white checkerboard squares, almost resembling an old fashioned ice cream parlor. Not only were the floors done in this pattern but the concession area and walls around it were done in the same manner. It was very bright and striking. It had small 250-seat auditoriums with a slight slant to the floors. The theatre closed on December 23, 1999 and has since become a church called the Nations Worship Center.

I can concur with Stephen Evans since he was my boss in 1991. The theater from I had heard was built as a Plitt Theater in the mid 70’s with the growth in what was south Arlington at the time. After leaving Cinemark in 1992 and graduating High School, I went to college and had some courses in construction and recall that if you looked at the building, the atrium lobby used to be outdoors. You could see that in a previous renovation, the ticket office and the arcade and dollar videos booths was a outdoor covered area. and the aluminum frames that held the glass and doors in place used to run straight through. Also, the concrete under the red and black checkerboard tile was aggregate which means it was not a poured floor which is smooth.
The projectors were never mounted to the floor and some were on wood pallets.

The bathrooms were tiny and when I worked on the weekends a double shift, I would be in the ladies room restocking toilet paper 3-4 times a day.
Number 1 was my favorite auditorium, I recall when we had Die Hard 2 in there and the 747 would explode at the end, you could feel the vibrations.

Also we had to raise the black flap in 1 & 2 to show anamorphic films and us ushers would forget until the patrons would say oh the movie isnt filling up the whole screen and either the projectionist or I would run in and put it up.

Oh boy, do I remember this theater. There was an emporium in the same shopping center and Tuesday night, was $1 night. I saw Superman there in late 1978, it was playing on two screens and they both were packed. I remember too, that it was a Plitt Cinema for a period of time. I moved from Arlington in 1986 and by then, many other theaters were open. I do wish someone would post pictures of this theater. And being in Arlington, someone should list the Six Flags Cinema. That’s famous too, and was a very cool place to hang around.

Doing some research, this was listed as a Plitt Cinema in 1980 and I went to this theater for at least a few years and it was Plitt during that time. Not sure when it changed, but the source was a 1980 Dallas newspaper.

I worked for ABC THEATRES then PLITT when they bought us out.This does not seem like your average Plitt theatre!

Just from newspaper articles and ads, this theater started out as a concept by Trans-World Enterprises called “The Carrousel,” a family entertainment strip at the northwest corner of Collins Avenue and Pioneer Parkway. The Carrousel’s restaurants would take up 12,500 square feet and at the end of the strip was a 10,800 square foot quad-plex with 250 seats each. Groundbreaking ceremonies were held for the million dollar facility on February 13, 1973 to open prior to year’s end. The lobby was unusual and the concept was a pre-cursor to the better-integrated notion of movies plus meal with the money staying in house that was a trend in the early 21st Century. The projection was supposedly designed to be automated so that personnel could be efficiently cross-trained for the entire operation. The Family Carrousel Entertainment complex concept — which was supposed to spread nationwide and most immediately to a planned Carrousel in Coffeyville, Kansas — doesn’t appear to have gained much traction.

Based on the ads, the theater has bookings listed as the Pioneer Cinema in 1976 and it appears that the theater transfers to the fledgling Charles Boren Circuit and it’s renamed the Arlington Cinema IV. The theater was then operated independently of the adjoining strip center businesses. This operator briefly moves the theater to an odd pricing structure where one screen is designated as the dollar screen, one is designated as the $2 screen for long-running hit films, and two have opening-week features at $2.50. Tuesdays were designated as bargain nights. In mid-March of 1978, the theater goes totally to sub-run, dollar house operation.

In 1980, the Plitt circuit takes on the theater. It flops the name to Cinema Arlington IV and then simply Cinema Arlington. It does try to return to first-run during its operation. As a circuit, Plitt Southern would succumb to newcomers within DFW to circuits including Cinemark before going out of operation. Not surprisingly, the Cinema Arlington would become part of the Cinemark family where it receives its final name of Movies 4. Cinemark tags the theater as a sub-run dollar house facility. Apparently, Titanic was quite the hit for the theater in 1998. The moviehouse may have ended as an independent as its theatrical era ended. One might surmise that the theater fulfilled an initial 15-year lease followed by a 10-year lease before eventually becoming a non-profit house of worship. The facility was still a house of worship as of the mid-2010s with its original attraction board still apparent on the Collins St. signage.

Again, this is based on the ads and some articles as this theater wasn’t on my frequently visited list.

This opened on March 28th, 1975. Grand opening ad in the photo section.

The theatre closed December 23, 1999 as an independent by the operator of the Park Plaza Cinema with “Superstar,” “Deep Blue Sea,” “Inspector Gadget,” “Light It Up” and “The Fight Club.”

Just curious if this was the theater operated by Ricky Chambers in the mid to late 80s? He also operated a film delivery service that serviced my theater the UA Prestonwood Creek 5 in Dallas. And later he serviced my two Trans Texas theaters in 1992-93. I remember one night at the Prestonwood that Ricky showed us some pictures of storm damage at his theater. Probably 86 or 87.

Appears to have been, yes.