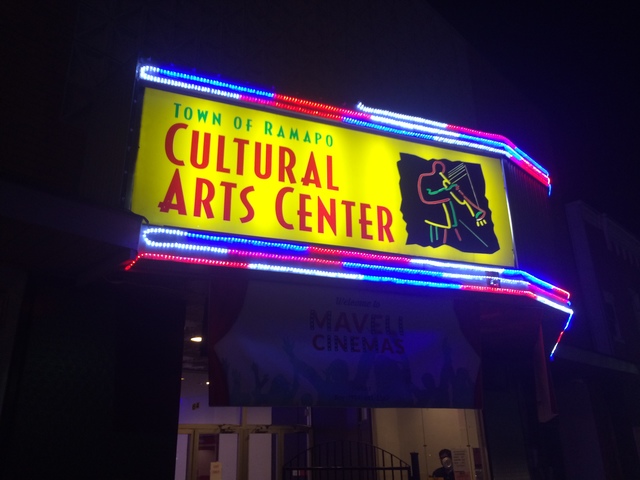 This Rockland County neighborhood house opened as the Spring Valley Cinema in July 1962. It spent the last 15 years of it’s existence showing adult movies and closed in 1988. Around 2002 it was reopened as the Town of Ramapo Cultural Arts Center.

Announcing the opening of the Spring Valley Theatre, July 1962:

“Free Coffee Served in Our TV Lounge”. I guess that was for between shows. If the movie was as good as “Judgment at Nuremberg”, who’d want to sit in the TV lounge instead? :)

If this is the old theater on the main drag in Spring Valley, it was operational at least into the late 90s (maybe early 00s). You could tell it was a grand old theater in its day. Big balcony and lobby, grand staircase, and a large lounge area downstairs. All in a horrendous state of neglect. I remember, on one of my last visits, walking in to find the cashier trimming his toenails in the lobby. Really set the scene.
But I think it was one of the last surviving huge porn palaces (very reminiscent of NYC’s Adonis) in the country. Last I heard, it was sold to a local non-profit that intended to restore and reopen as a “performing arts centre”. Gonna be a tough sell in that neighborhood. It’s a busy street, but the immediate residents are pretty rough (and predominantly recent immigrants — you see the day-laborers lined up along the highway in the morning), and I’d only venture there during the day.
I thought there’d be a lot of activity on this listing. Somebody must know more than I do.

Well, curiosity got the best of me. Drove by this week, and it’s now the “Town of Ramapo Cultural Arts Center”. Don’t know the extent or quality of the restoration, but there seem to be a decent number of events on the schedule. Currently has 465 seats. The address is 64 N. Main St. Interested parties may schedule a tour by calling (845)357-6100. If I didn’t live 400 miles away, I’d call myself!

It was taken over by the town of Ramapo I completely refurbished about 13 years ago. They had some concerts and rented out for private events. In the summer of 2015 they showed children’s movies Friday night Saturday and Sunday free of charge. As of October 18, 2015 Mavali Cinemas which used to be located in the Kennedy shopping plaza on route 59. Took over operation of the theater. They now show Indian movies. Admission is $10. They have a Christie digital projector in the booth. As well as an old 35mm projector that’s not used but functional. The seats are very comfortable the Soundsystem excellent and the screen is large. Jacob Roy is the man who runs the theater now . They have very affordable confessions candy bars soda water as well as tea or coffee. The presentation of the movies is very good and they sometimes have two different movies playing Single night. Glad to see the theater which set on use for several years is now being used for Indian movies. As there’s A good number of Indian people living in Rockland County and over the border into northern New Jersey