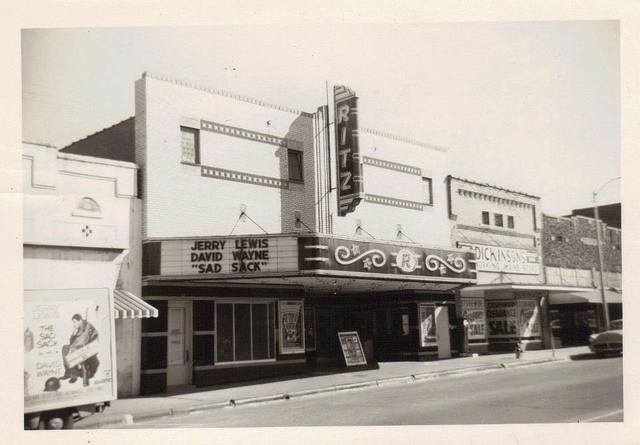 The Ritz Theatre, opened in December 1938, burnt down on February 25, 1948, and was rebuilt to the plans of architects Ginocchio and Cromwell, reopening October 7, 1948. In 1982 when under UA operating in was tripled.

twin theater – for sale on loopnet

this should read – screens -twin

Maybe the posting of some daytime photos would help to showcase the theatre better. Is there a link to a current listing or something?
I’m not in the market, but thought anyone who might peruse the site, might take a second look if there were pictures.
“Theater for sale” is indeed a great moniker to start with. I linked over just based on that alone.
Best of Luck!

Thanks Lost Memory. I did click on the Loopnet link, but it only had 4 very dark photos. 3 really, as 2 of the 4 were the same interior shot. I thought the realtor might have some more current sales type pics. One’s that showed the exterior in daylight, etc. Thanks again.

Thanks TFS. My e-mail is:
I think it may be the only thing in my profile. Which I blindly used my real name on back in 2005 or whatever. I was Googleproof until then. Well, losing out on a 2006 Emmy saw to that too.

Good luck with your sale, and the hopes The Ritz will remain a theatre for ever.

The December 10, 1938, issue of Boxoffice said that the Ritz Theatre had been designed by the Little Rock architectural firm of Brueggeman, Swaim & Allen. Another item in the same issue said that the opening feature scheduled at the new theater was “The Mad Miss Manton,” in which a local actress, Catherine O'Quinn, played a roll. The exact opening date was not given, but one item said it was scheduled for Thursday, which might have meant the Thursday before publication (December 8) or the Thursday after (December 15.)

The Ritz was originally opened by Ray Morrow in partnership with R&R-United Theatres. Morrow had been an exhibitor in Malvern at least as early as 1927, and operated the Liberty Theatre in Malvern as late as 1940. In 1941 he reopened the Liberty as the Joy Theatre, which was being operated by Robb & Rowley as late as 1954. Morrow died in 1944.

Malvern also had a theater called the Rio, for black patrons only, opened by W. F. Caffey in 1947. One Boxoffice item about the 1948 rebuilding of the Ritz said that its formerly segregated balcony with separate entrance had been converted into a white balcony with access from the main part of the theater as part of the reconstruction. Perhaps this was the result of the opening of the Rio.