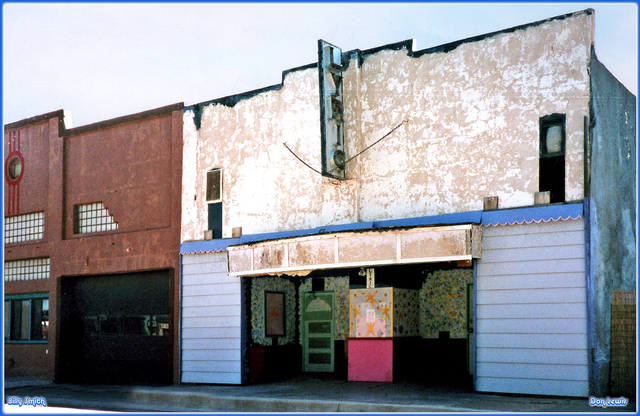 Someone was living in the Lyric Theater when I saw it last about 21 years ago. It was a small white stucco building and still had its “Lyric” sign. Carrizozo is a quiet town in central/southeast New Mexico.

The Carrizozo Theater was opened in 1916 as an Opera House. It was screening films by 1918. It was renamed Crystal Theater, and in 1938 was renamed Lyric Theater when the seating capacity was listed as 319.

The Lyric Theater was closed in 1979, after problems & protests over the screening of “The Exorcist”.

In 2010, there are plans being prepared to renovate the Lyric Theater.

The present “Lyric Theatre” was built in 1916 as an Opera House. It opened as the “Carrizozo Theatre"
In 1918 the name changed to "Crystal Theatre”, and began to show silent movies. First Silent Movie shown was “Till I come Back To You”.
When sound movies came along, it reopened with sound on June 13th,1931,and re-named “Lyric Theatre”. First Sound Film shown was
“THE LAST PARADE”.
It remained open until 1979 when it closed due to some rating dispute over the Exorcist . In 1981, the theatre was bought by the person that lives in the theatre. He also owns the three buildings north of the theatre as well. I have photos as soon as you are able to take them.

The building, like many in this town and area, is made of adobe, and wood. Stucco was placed over the adobe, but can be seen exposed at the rear of the building where the stucco has fallen off.

My photograph of the LYRIC www.flickr.com/photos/lastpictureshow/214271727/

Here’s a 2006 view of the LYRIC: http://www.rushcreekgallery.com/lfop/index.html

A 2007 view of the Lyric Theater in Carrizozo.

The July 2, 1938 issue of Film Daily said that the Crystal Theatre at Carrizozo had been renamed the Lyric.