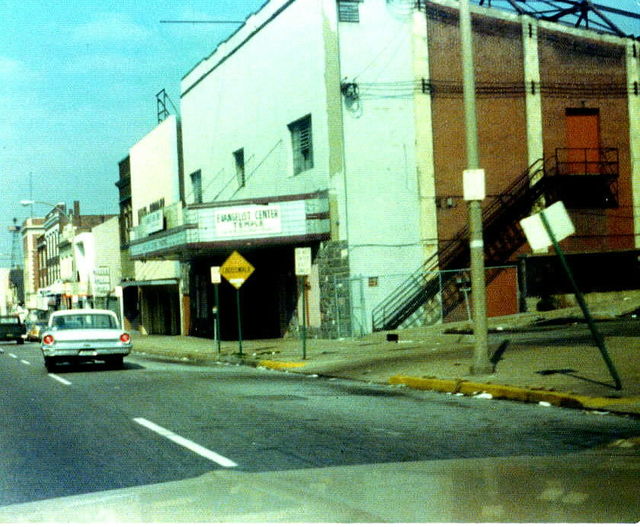 The Mikado Theatre was located on the north side of Easton Avenue (today renamed Dr. Martin Luther King Drive), just east of Hodiamont Avenue in the Wellston business district in the west end of the city.

The O.T. Crawford chain built the Mikado Theatre in 1911, the architect was F.A. Duggan. The original theatre had an Oriental Japanese design and seated 1,608, including a balcony.

The building was completely redesigned in 1939 in a modern Art Deco style. Fire regulations, wider seats an aisles reduced the seating capacity to 1,103. The newly modernized Mikado Theatre added a permanent marquee projecting over the entrance.

Opening name was MIKADO, which was appropriate as the theatre was designed in Japanese style. Original seating capacity was 1608, with a balcony.

In 1939, St. Louis Amusement stripped the house of interesting architectural design and went to an “ultra-modern” design…as well as reducing the seating capacity to 1103 (650 on main floor; 453 in balcony). Architect of the re-do was Sol Abrams.

The Mikado name was not to last much longer. A $50 prize was offered to the winner of a rename the theatre contest soon after WWII began, and the theatre became the VICTORY in February, 1942.

I misstated the address…it was 5951 Easton. Sorry.

the correct url is at View link

or do a search for missouri theatres

One of the many theatres built and initially operated by O. T. Crawford, the Mikado opened its doors November 29, 1911 with a policy of vaudeville, musical comedy and films. At its opening, the publicity stated “The only theatre in America finished in Japanese Renaissance.”

Hi everyone.
The above image of the former Victory Theatre certainly seen better days. I used to see movies at the Victory and at the other theatre (the Wellston) located at the other end of the block(s) on the south-side of (Easton)where MLK and Keinlen Av intersect.
The Wellston is long gone.

Wellston is dead, devoid of any economic activity. The Wellston Bus Loop was quite a hub when I was kid in the 50s and 60s. If you went north toward Pine lawn, you could see a movie at the tiny Studio Theatre.

I am not sure that the Victory building bears much resemblance or even if it still there.
I last saw Wellston in 2006.
It would be better if they knocked it all down
Any comments about the building as of 2011?

Much thanks for the Mikado image. It is a good-looking theatre. It is hard to believe it is the same theatre building. Patrick

The Victory was open as late as 1969, as I have seen an ad for THE GREEN SLIME showing at the Victory.

The last ad I’ve spotted for the Victory was in February, 1972.

In many cities the Mikado name was dropped? This site only shows two theatres and one drive-in to have ever had that name.