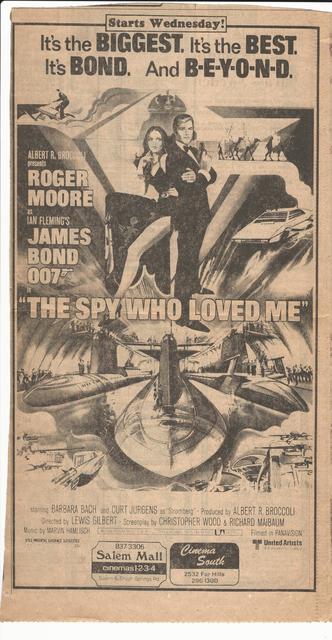 The Salem Mall Cinema opened on November 23, 1966 as a single screen cinema with Jack Lemmon in “The Fortune Cookie”. Later a second cinema was built on to the original building. Then in the late-1970’s the original screen was twined (2 & 3) and a fourth screen added to the rear of the theatre that you had get to by walking the back hall of the Mall.

Sony closed the cinemas in July 1996. Ultra Saver Cinemas reopened the cinema in January 1998. It closed for a day in April 2000 for having mice troubles. The cinema had also been home to a small riot in 1999. On July 29, 2001 Ultra Saver Cinemas closed the fourplex after many nights of only two or three people watching the flicks on screen. The Salem Mall Cinema rent was $17,500, which did not matter since the mall only had five stores open and the city of Trotwood began demolishing the mall starting in April 2005.

The Salem Mall Cinemas, which is just, down the street from Salem Avenue Cinemas (Kon-Tiki) and Cinema North is another one of West Daytonâ€™s failed and trouble cinemas. The riot in 1999 involved some 200 patrons fighting in the mall’s parking lot, a Trotwood Police Carâ€™s window being shot out, two windows from the cinema being broke out, pepole being treated from pepper spray fumes throughout the mall. The Salem Mall Cinemas also had a fire start in a trashcan during â€˜Any Given Sundayâ€ and a man was beaten during â€œNext Fridayâ€. They had a good midnight run of â€œBoys â€˜N The Hoodâ€, â€œNew Jack Cityâ€, â€œDead Presidentsâ€, Tupac Shakur in â€œJuiceâ€ and â€œPurple Rainâ€. However it was cut short for security reasons.

I live behind the mall. I’ve been to Salem Mall Cinema since I was 6 years old. I live in Trotwood for most of my 36 years of life and I can tell you that it was the place to be in the 70s and 80s. I seen plenty of movies there. Movies such as Superman, Star Wars, Home Alone I and II, Beaches, etc. The theater, along with the rest of the mall declined, beginning in 93. By late 1993, some of the seats were torn, sticky floors, fading curtains as well as rude and crude movie patrons. It has gotten so bad financially that it had to close in 1996. I wish I can go on to say more but time’s up for me on the computer. This is all for now. Good night.

I was able to see the Salem Mall in December of last year. The entire mall, except for Sears & Roebuck, lay in rubble on the ground. The theater is obviously gone. My understanding is that the mall is to be rebuilt but I have no idea if it is to have a movie theater.

I just got back from the Dayton Amateur Radio Convention. This is what I saw. The mall is gone. All thatâ€™s left is the Sears which is still open and complete with its five bay auto center. The mall entrance was bricked up and the rest of the mall, sans the parking lot, was demolished. Even the pad was broken up and removed. Whatâ€™s left of the mal proper is the soil that was under the slab and the vast parking lot. In the far corner nearest the intersection is a Home Depot.

This theatre played a number of 70mm films over the years, and they are listed in an article at the In70mm website 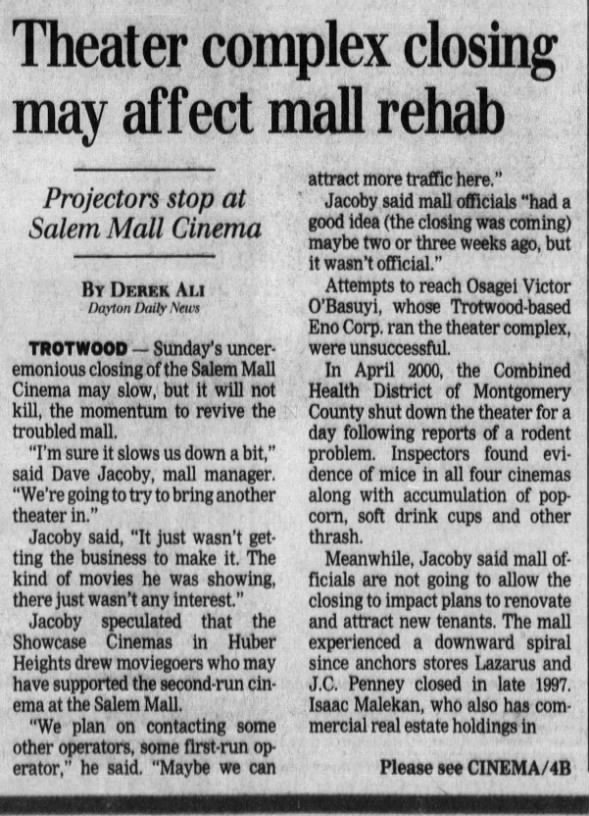 An item about the new Carousel Theatre in Cincinnati appeared in Motion Picture Exhibitor of August 10, 1966, which said that “… the theatre was designed by Pansiera, Dohme and Tilsley, architects, who also designed the plush New Salem Mall Cinema now under construction in the deluxe regional Salem Mall Shopping Center, Dayton, O.” Principals of the firm were Donald Pansiera, Arthur Dohme, and Tom Tilsley.