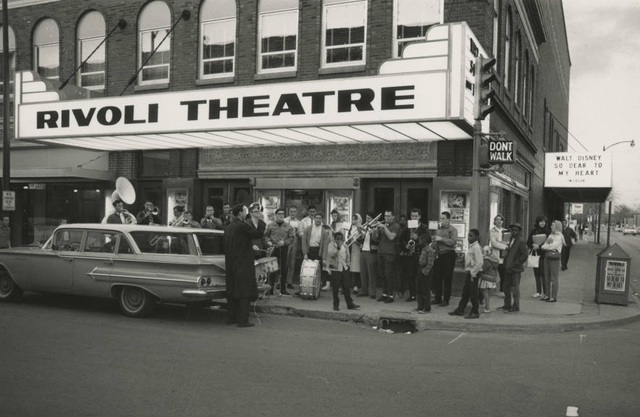 The Rivoli Theatre was located on the corner of Mulberry Street and E. Adams Street in downtown Muncie. It was opened April 16, 1927. The theatre opened with vaudeville and motion pictures. It was operated by Publix.

The theatre’s owners also operated the Rivoli restaurant next door. It was a very popular eating establishment for downtown business operators and for the local student population from up the street.

The balcony was closed off in later years. The Y & W theater circuit in Indianapolis twinned the theatre on August 16, 1976. They sold it to an independent operator in the early-1980’s and it closed in January 1987.

In the late-1980’s, Ball Brother foundation purchased the Rivoli Theatre and razed the building in 1987 to make way for their new headquarters.

I remember going by the theatre during it’s demolition and the stage house was the only part of the theatre left to be torn down.

What a sad day for the community…

I was a high school student when the Rivoli came down. I have many great memories of this theatre. The last time I was in it, I craweled under the fence late one night after demolition had started (kids, don’t try this at home, you can get hurt really bad). I sat on a pile of rubble on top of what used to be the orchestra pit and looked out at the night sky, as the roof already was gone. it was very sad. On a side note, some of pipe ranks of the Wurlitzer pipe organ, which was removed long before the demolition, can still be heard today, playing the organ installed in the Hedback Theatre in Indianapolis.

A little over a year ago I tried to get my son into the Rivoli Theater in Indy. Iwas told at that time it was too dangerous. I happened to be on 10th St. today and stooped to look into the lobby.There were wall lights on and it was cleaned. There was also a answering machine on the candy sales cabinet. My son is studying movie production at Butler University and would really love to see the inside.

The photos of this theatre posted on Cinematour.com would indicate that this was not an atmospheric.

I saw Star Wars numerous times in this theater as well as countless others.
The theater remained open, limping along through the later 70s and early 80s. I believe around 1984/1985 it closed it’s doors. The demolition took place around 1986/1987. It was razed for an office building for Ed Ball. Despite anger at it’s proposed demolition, Ed’s millions spoke louder than those of us who cherished this theater. Had it been even a couple years later, it would have been saved by the Historic Preservation bills. Ed knew it was coming so he went after it right away.
He moved Ball Corp out of Muncie in the late 90s.
The photos on Cinematour were shot by a friend of mine and showed the theater after it had closed it’s doors. Seats were removed for sale and it was selling off the rest of the items as well. In fact, the photos are from around the time after the selling off of property. The public could come in, choose what they wanted and buy it. People started cutting sections of the screen to take with them. I remember going to the open sale on my lunch break. It was so sad to see. I ended up just buying a coulpe slicks from TOMMY and ONE FLEW OVER THE CUCKOOS NEST. When it came down, several people people were taking bricks. I saw this as stealing so I never did take one. Now, I sort of wish I had. They most likely went to a landfill. A friend has a section of three seats from the Rivoli. They still take me back.
It was a fantastic theater and could have easily been brought back to it’s glory and become an art house theater or anything along those lines.

My Grandparents went here regularly in the 20’s. My mother saved two programs from when it was new in 1927. The cover says Fitzpatrick-McElroy’s Spanish Shrine of the Silent Art. Harvey “Doc” Arlington was the Managing Director and F. LeRoy Nelson played the Mighty Rivoli Wurlitzer Organ. Inside it says it was the coolest spot in town 40 degrees cooler than outside. Prices were 10-50 cents.

Speaking of photos posted on Cinematour:

In one of the photos at CinemaTour that Life’s Too short linked to, you can make out the sign for the cross street, and it’s Adams, not Charles. The “Theatres in Construction” column of Variety, May 26, 1926 said that the theater that was to be built at Mulberry and Adams Streets in Muncie had been designed by Indianapolis architect Donald Graham.

Article for the closing

In April 1933 the Federal bankruptcy referee announced that this theater, formerly operated by Publix-Fitzpatrick-McElroy, Inc., was sold to the newly formed Theatrical Managers, Inc. The new company included veteran theatrical operators V.U. Young of Gary, IN, and C.J. Wolf of Wheeling, WV; and Pierre Goodrich and Leslie Colvin, both of Indianapolis.