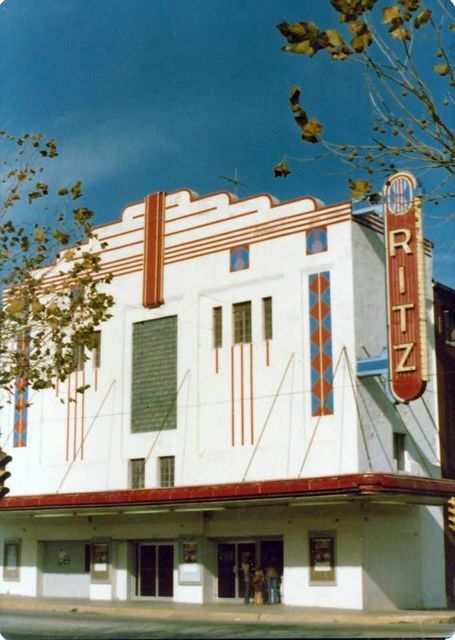 The Hinton Theatre was opened on April 18, 1905 with a play. On October 25, 1920 it was renamed Orpheum Theatre, playing Orpheum vaudeville. It was later renamed Orpheum Theatre. It was renamed Ritz Theatre on October 4, 1928 following the installation of Vitaphone sound equipment. It was the grandest of all the local theatres. If it was a “big” movie, then it played at the Ritz Theatre. The theatre was Muskogee’s oldest and was managed and operated by the Proctor and Marsh Company. It was remodeled in 1938 to the plans of archirectural firm Corgan & Moore

It closed in 1976 and was demolished in 1977. Proctor and Marsh operated all the Muskogee theatres at one time.

In 1970 while attending college in Warner, OK, the group I ran with regularly went to see movies at the Muskogee Ritz, a grand theater indeed. The lobby was four stories high, with three clover shaped mezzanine balconies overlooking the main floor, topped by a fancy clover shaped dome.
The auditorium was most ornate, and also had a massive round dome overhead. Stage drapery appeared to be original, heavy emerald green valour, with dozens of gigantic gold tassels running along the bottom portion of the curtains. Valances formed graceful scallops with heavy gold fringe. It was a sad day when I learned that this lovely theatre had been razed.

This theater opened in the teens as the Hinton Theater. It featured touring stage shows, magicians and musicians. It was later bought by Fred Turner and the name was changed to the Orpheum. In 1925, it was sold to George Proctor and Hugh Marsh and the name was again changed to the Ritz. It operated as a vaudeville house until 1928 when it was equipped to show talkies. The legendary Tom Mix visited the theater in 1929.

To view c1900 postcard images of the Hinton Theatre go to the below page, in the search area type in the word “theatre”. Once image downloads click on photo again for a larger picture-
View link

Due to style similarities this theatre was probably designed by famed architect Joseph Foucart who migrated in 1889 to Indian Territory from Paris, France.
Foucart created Brooks Opera House, Guthrie, OK.

Vintage postcard views can be seen on this fun site.
http://www.roadsideoklahoma.com/node/460

This article from the Muskogee Phoenix says that the Hinton Theatre was built in 1905, was renamed the Orpheum in 1920. It doesn’t give the year the name Ritz was adopted, but it must have been by 1929, as the article says that Procter and Marsh, who renamed the house after taking it over and remodeling, introduced talking pictures at the Ritz. The name Ritz was definitely in use by February, 1930, when it was mentioned in a newspaper item.

The house was still called the Orpheum at least as late as January, 1928, when a production of Phillip Duning and George Abbott’s play Broadway was mounted there by the authors. The Library of Congress has a copy of the program for the production, but it hasn’t been digitized.

The 1929 edition of The Film Daily Yearbook included the Ritz in Muskogee in its list of new theaters for 1928, so that must be the year the name was changed.

Alexander Hinton created the Hinton Theatre launching with a live play on April 18, 1905. On October 25, 1920, its name was changed to the Orpheum Theatre playing the Orpheum Circuit vaudeville which had been playing at the Broadway Theatre. Films became the more prevalent choice for the Orpheum. On October 4, 1928, Vitaphone was installed in the venue for talking films and it was renamed the Ritz Theatre. The first sound film, however, was shown October 10, 1928.

Architects Corgan and Moore gave the Ritz a major streamlined moderne makeover including Art Deco fountain in 1938. The theatre would have a 70-plus year run before closing and being demolished.