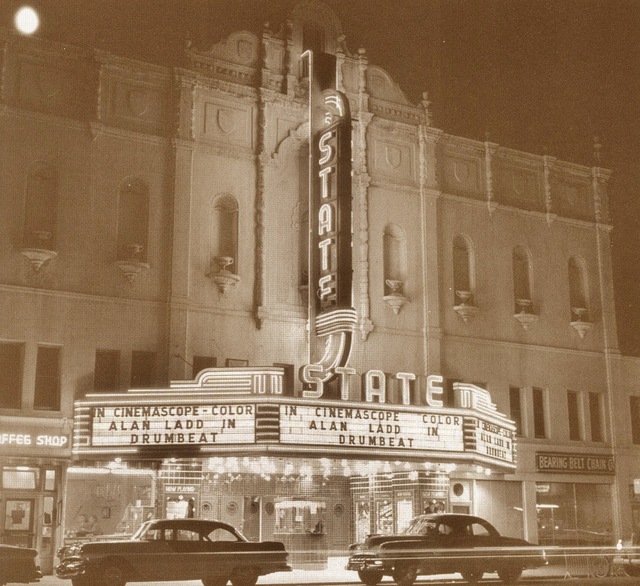 Opened as the National Theatre in 1927. This large theatre has been vacant since 1999, and in pretty bad shape. The facade is either baroque or mission, and painted in unsightly browns. It is interesting for the number of niches along the upper story, which held urns in the past. The street level is boarded up, and has tacky tile from the 1970’s. The marquee is similarly ugly.

I tried to post this, but I think it got lost. I was stationed at Beale AFB from June 1967 to January 1969. Two films I specifically remember seeing during that time are “Bonnie and Clyde” and “The Happening.” Does anyone know how I can find out if I saw these at the State or Tower Theaters? I’m writing something for my film blog and would like to know. Thanks!

I remember going there in the 80’s. I was just remembering an add campaign for a charity which ran before every showing. I think it was Carl Reiner, but it could have been Rob. Does anyone else remember these ads, or what chain was running it in the mid-late 80’s and early 90’s before it closed? I also seem to recall it having two screens then, but it had obviously been cut in half from when it did live shows earlier in its existence.

I lived in Yuba City from 1966-1974. To neuroted: I saw “Bonnie & Clyde” at The State Theater when it first came out, and then again later, as the State and the Sutter would often “re-run” movies that had been out for awhile, sometimes several years later.

I am very interested in refurbishing and restoring The State Theater to its former glory. I think it would be valuable to the community as a tourist destination, if it could be restored as closely as possible to its former glory in the Gold Rush Days. A museum, tours and a gift shop would help this. Also, local merchants could open gold rush themed restaurants & bars to enhance tourism.

I also think Ted Langdell and Donald Kirk had valuable ideas and insights. Ted, I went to YCHS with you. My name was Lori Laningham. I live in Nashville, TN now, but think often of The State Theater and what can be done. It was so sad to see it neglected when I came to visit for our 40th Class Reunion in 2014. I am so glad to see like-minded people worried and concerned about the State Theater’s fate.

Unfortunately I tried a number of times to contact the owners of the theatre to no avail. They won’t even reply to the city. I’m hoping the city ends up taking possession of the theatre and allows me or some group to take ownership of it and get it restored and reopened for both movies and live shows. I’d also like to have the Hotel included in the deal. Together they’d make a great entertainment and meeting place; as well as senior housing (especially Vets). My current email is Don Kirk

i uploaded the original national theatre picture and think that could be a way to restore the marquee. the rockland strand in maine did similiar where the took the 40’s marquee off in favor of the original and set the theatre up for film and stage venues boasting current techonology in a close to historically accurate venue

It was with sadness that I witnessed the demise of the State theatre in Marysville, after being a projectionist there from 1966/1987. I was told that the fire department had a hand in the closure. “It will never be a theatre again” It was quoted.

Today, Oct 30, 2016, I sent a message to the City of Marysville, asking what can be done. Although I am no longer involved with the Dunsmuir (CA) California Theatre, it is in usable condition today “partly” due to my efforts. There are ways to get around city ordinance requirements. I have been involved in city(s) politics since 1971 and learned a thing or two contractors don’t know in many cities. As for restoration costs, there is a lot of “used” but new condition seats, lighting, sound systems, etc., that can save $$$$$$$$$$$ and $$$$$$#$#$$. I suggested a way for the city to take over ownership if they will just act upon it. I don’t actually want ownership, but to form a local nonprofit to own it; which I can at first be CEO (until restoration is done); then I’ll rent the theatre for producing shows. I have Entertainment & Senior Housing plans for the Hotel as well. We all need to contact the Mayor and push to have the city act.

Seth Gaines please contact me about updating this overview. It’s not totally correct. I think someone changed/ updated the correct post. I have a Facebook page I started years ago about the theatre. I have done much research on this theater.

I’m just recently in contact with one of the owners! He is talking about restoration of the theatre, and just recently got some contractor bids. I’m planning a face to face meeting with him. Will keep updates posted.

Jmetcalf, what’s the latest? I just drove by the State after not seeing it for years. Did you contact the owners? Does anyone have current or vintage interior pix? Thanks!