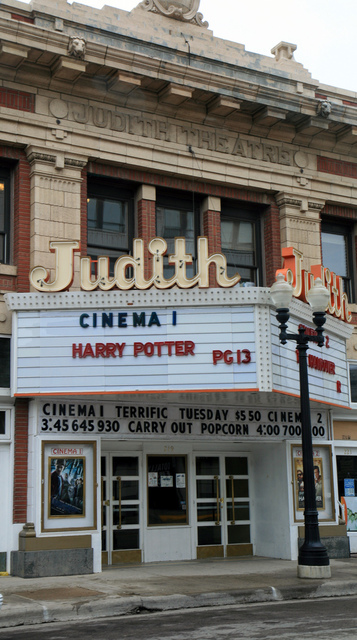 The Judith Theatre opened in 1914 on Main Street and has been in use ever since. The theatre features a Beaux-Arts style façade, with with tan stone and red brick. The name of the theatre is inscribed under the cornice. The marquee appears to date from the 1960’s and is a fairly plain triangle with the word “Judith” in blocky, stylized cursive script.

A remodeling in 2006-2007 transformed the Judith into a twin. It was the first major remodel of the Judith Theatre since 1948. The theatre is currently part of the Polson Theatres chain

In the 1940s and earlier, and probably at least as late as 1953, there was a second movie house in Lewistown, called the Broadway Theatre. The April 21, 1951, issue of Boxoffice Magazine said that the Broadway Theatre in Lewistown had been redecorated and was reopening after having been closed for several years. The theater would be open only Saturday and Sundays.

The December 13, 1952, issue of Boxoffice Magazine said that Don Campbell, manager of the Broadway and Judith Theatres, had announced that the Broadway would show only western movies and would be open only on Saturdays and Sundays. Campbell said that the house might go to seven-day operation later that winter, but I’ve found no later references to the Broadway Theatre.

But then, from 1953 to 1958 there are a few items in Boxoffice referring to a Fergus Theatre in Lewistown. Might this have been the Broadway Theatre, renamed?

Here is another photo:
http://tinyurl.com/yhnoha7