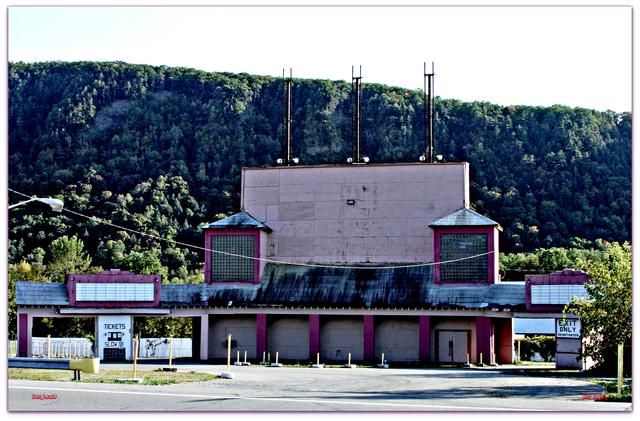 The Elmira Drive-In opened on April 16, 1949 with John Wayne in “Angel and the Badman”. It was a single screen theatre. For a while it was also known as the Big Flats Drive-In. In 1963 it was taken over by the Dipson Circuit who operated it until 1976 when it was taken over by Galaxy Theatres of Rochester, NY. In 1980-1982 it was owned by S.J.M. Entertainment Co. In 1999 a second screen was added by the current owners the Zurich Cinemas chain and their managers Dale & Karen Chapman.

The Elmira Drive-in opened on April 16, 1949. It currently has 2 screens and is still in operation.

2008 views of the Elmira Drive-In here, here and here. The drive in is open and doing well despite the way it looks in the photo.

From 2007 a view of the Elmira Drive-In in Elvira New York.

Address according to their website: Elmira Drive-In 2431 State Route 352 Elmira, NY 14903. They have made the conversion to digital projection.

Gee whiz, this drive-in changed hands a lot! Decades of issues of the Elmira Star-Gazette provided a lot of details.

The Elmira Drive-In Theater Co. opened the drive-in on April 16, 1949. At the time, the company’s president was Harry L. Berinstein, and its VP/treasurer was Benjamin Berinstein. Horace Robinson was the manager, and its grand opening ad said it had room for 800 cars.

The 1949-50 Theatre Catalog listed H. L. Berinstein as the owner and the capacity at just 500. That stayed through the 1955-56 edition, which listed its home town as Big Flats NY.

On May 1, 1963, The 153 Corp., took over the drive-in from the Elmira Drive-In Co. with a “long-term lease”. That put it under the control of the Dipson Circuit, which owned or ran Elmira’s indoor theaters and a couple dozen others in the region.

By the International MPA’s 1966 edition, the name had changed to Elmira, the owner had changed to Dipson Circuit, and the capacity rose to 800, where it stayed through at least 1976.

In August 1976, the Elmira’s lease “held by Cornell Theaters” was transferred to Galaxy Theaters of Rochester. Shirley Owens was manager and said that Cornell had been operating the drive-in for a year and a half.

Later owner listings in my International MPAs: 1978: not listed. (although it advertised that year) 1980-82: S.J.M. Entertainment Co. The August 10, 1980 Star-Gazette listed under Property Transfers, “Beatrice W., Ann M., Henry W., William P. Berinstein to Samuel J. Mitchell, Ann N., Henry W., and William P. Berinstein and Mary S. Westman.” Sounds like Mitchell bought the top slice of the family business. There’s an S.J.M. Entertainment Corp. registered in Baldwinsville NY, CEO Samuel J. Mitchell, but it was registered in 1985. Maybe it was his Company before it became his Corporation.

Conrad and Linda Zurich (spelled Zurick through 1988 articles) bought the drive-in in January 1985 and renamed it, at least in newspaper ads, as the Elmira Bargain Drive-In. It had to end its 1986 season early after a fire in the fall damaged the building. Fire hit again in October 1987, deliberately set a week after vandals smashed its electrical meters. Susan Calabrese was the manager from at least 1987 through 1998.

An August 1998 article subtitled “Despite rundown appearance, Big Flats facility still draws the crowds” said the drive-in suffered from “badly peeling paint, broken neon lights, (and) overgrown vegetation”. Could that article have prompted the Zurichs to change managers? Dale and Karen Chapman took over as managers the following season, started by adding a second screen, dropping the “Bargain” from the name, and working to spruce up the place.

In 2008, Zurich Cinema operated the drive-in, and they still do that today.

A side note about Elmira attorney LeRoy Stein. When the project was first announced on April 21, 1947, he was called the president of the Elmira Drive-In Theater Co. On June 4, 1948, as construction was about to commence, he was called its secretary / treasurer. When groundbreaking was reported on June 21, 1948, he was down to just secretary. Stein’s 1964 obituary mentioned that he was a member of the Elmira Symphony Orchestra but said nothing about the drive-in.

Opened with “Angel and the Bad man”.