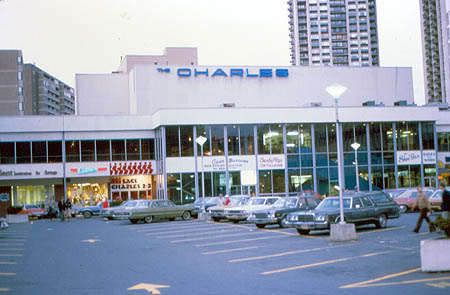 The Charles Cinema was opened April 7, 1967, and had, for a time, the biggest movie screen in Massachusetts. It was a great place to see an ‘event’ movie, like “The Empire Strikes Back” or other blockbusters. The style was modern and simple. The Charles Cinema was the “Astor Plaza” of Boston: a top-notch presentation with a huge audience.

Oops, I had looked up Beacon Hill as per comment by Roger A & meant the Beacon Hill in my comment.

So for those of you who think the screen at the Charles was large you have never seen a large screen. The Astor screen was wall to wall and installed by Todd-AO.

I’ve no doubt the Astor screen was huge. I’ve seen huge screens such as the DC Uptown, Seattle Cinerama, etc. But when I lived in Boston the Astor wasn’t open anymore & the Charles was the best there was. And, it was good.

To Shirley Marquez. The Cinema 57 was never split. It was built as a twin. When you walkwed in there was one auditorium on the right and one on the left. The lobby was in between which by the was was very large. The theatres were not long and narrow. You are mixing this up with some other theatre you have been in.

When the Charles opened by Reade. It had a big screen.. The only 2 bigger were the Metropolitan(Music Hall/Wang ctr). When Ryans Daughter opened there the screen was huge. After Ryans daughter the screen was changed.

Shirley Marquez might have been thinking of the Pi Alley, a good single screen that opened in 1969 that was twinned down the middle less than a decade later, resulting in two long narrow auditoriums with postage stamp screens. Watching a film from the back rows of the twinned Pi Alley was an exercise in frustration. The 57 was better, but not by much. While the 57 auditoriums were fairly wide (I wouldn’t characterize either 57 auditorium as a bowling alley), they were also long, with screens that were surprisingly small, especially in the bigger of the two auditoriums. The large auditorium at the Charles was certainly superior to either the 57 or Pi Alley.

The Charles was where all the (original trilogy) Star Wars films played. Seeing “Star Wars” on opening day, back in May 1977, on that gigantic screen, blew my 10 year old mind…

Missed opening day but was there the second day for the original Star Wars run. They were still giving out “May The Force Be With You” buttons and had them there for the taking on a small table. I’ll always regret not taking a few, the one I did take was later lost.

The Charles' 70mm engagements are noted in this new article on Boston’s large format and roadshow history.