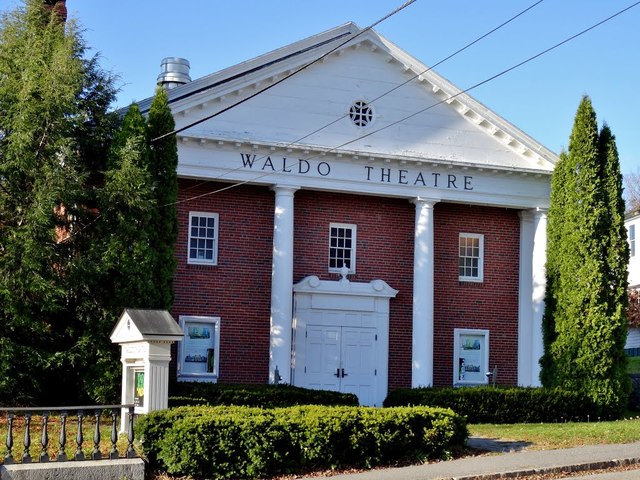 The Waldo Theatre opened on December 9, 1936 with Bing Crosby in “Pennies from Heaven”. It was designed by architect Benjamin Schlanger with an Art Deco interior with seating for 400 and a façade done in Colonial/Greek Revival style. The Waldo Theatre was renowned for its wonderful acoustics. The Cooney family operated the Waldo Theatre from its opening day until closing in 1957, when the theatre was thereafter only used sporadically as a Masonic Hall.

In 1981, it was purchased by a couple who began extensive renovations on the theatre. During its many years of disuse, the Waldo Theatre had fallen into severe disrepair. Since 1990, the theatre has been owned by the non-profit Waldo Theatre, Inc., and features a variety of performing arts and live entertainment as well as classic movies. It once again became the showplace of downtown Waldoboro.

It was closed in 2014 and fell into a state of disrepair. In 2017 a new management board took over and were desperately seeking emergency funding for roof repairs to prevent further structural deterioration from ongoing water damage. Board members were told that, if water damage wasn’t halted by the end of 2017, the structure is likely to deteriorate beyond saving. Thankfully, restoration work began and was completed by fall of 2020 when the theatre reopened, although Covid-19 pandemic restrictions were cause for concern.

The Waldo Theatre was listed on the National Register of Historic Places in 1986.

The Theatre Historical Society on-line archive has the MGM Theatre Report for the Waldo; it’s Card # 454. Address is Main St. There is an exterior photo taken March 4, 1941. Condition is Excellent. The report says it opened in 1936 and was showing MGM movies. There were 260 seats downstaira and 187 in the balcony; total 447 seats. 1940 population was 2,497.