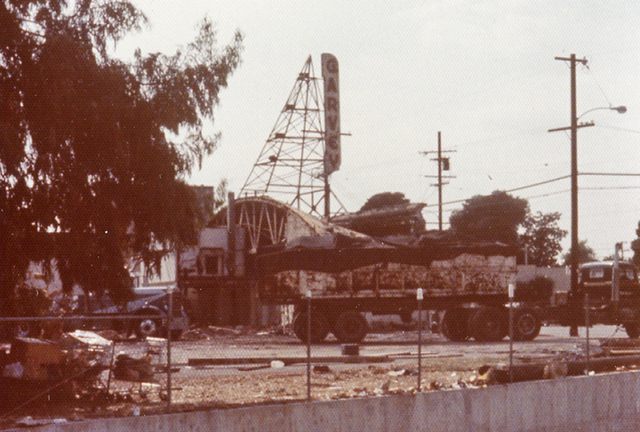 The Garvey was a small neighborhood house about eight miles east of downtown Los Angeles in an area called Garvey (at the time the theater opened), then South San Gabriel, and which was finally annexed by the City of Rosemead after the theater had been closed for many years.

It was built c1940, operated as a second or third run movie house until the mid 1950’s, and then was used as a church for the remainder of its existence. It was demolished in the late 1970’s, the victim of an urban renewal project. For many years, its marquee bore the words “Dancing Deliverance Revival” spelled out in the letters which had once spelled the names of movies and stars.

The building was of masonry construction, with a wood truss roof. About 1950, the building was gutted by an arson fire, and the roof had to be reconstructed. The style was simple and modern, with a vague suggestion of Spanish Mission style in the form of a bit of tile trim along the roof edge. There was a tripartite marquee, the two sides angled back from the center section, the name Garvey repeated on all three sections. Atop the building was the vertical name sign, carried on an open metalwork tower lined outlined with white neon which flashed on and off in synchronization with the changing colors of the name.

The lobby was of modest size, and the auditorium was closed off from it by drapes rather than doors. The concession stand was on the wall between the aisle entrances. It was a two-aisle auditorium, and was so low that the openings for projecting films were no more than three feet below the ceiling. There were six of the common octagonal chandeliers of metal with colored glass panels, and there were three or four wall sconces on each side of the auditorium. The side walls were each decorated with three or four large medallions (probably plaster relief painted bronze) featuring the profile of an American Indian, similar to that on an Indian-head penny. There were four or five rows of leather loges at the back of the theater, and ordinary plush theater seats in the rest of the house. I would estimate seating capacity at about 600-700.

The Garvey featured a crying room next to the projection booth, reached by a narrow, curving stairway. The restrooms (on the main floor) were rather large for a small neighborhood house, and well appointed.

For most of the time it was open, the Garvey was operated as one of the Edwards circuits' low-price houses, and a generation of neighborhood children enjoyed Saturday matinees for only a dime, and popcorn for the same low price.

700 block would have placed this theatre near the corner of San Gabriel and Garvey, where the old KMart store is located (now a chinese supermarket).

The Garvey was my old neighborhood theater. Until shortly after my sixth birthday, I lived on Falling Leaf Avenue, near Newmark. Because the theater was only a couple of blocks from out house, and I had an older brother and sister, I was allowed to go to Saturday matinees with them for most of the last two years we lived there, except the few months it took to rebuild the theater after the fire. (My brother and sister were allowed to go to the Tumbleweed in El Monte during that hiatus, but my parents thought I was too young to go that far without an adult.) I probably saw more than a hundred movies there, altogether.

The theater was just east of the wash, and its parking lot extended along the wash all the way from Garvey to San Gabriel Boulevard, so it had driveways entering from both streets. The rest of that block of Garvey was built up, but there were still a couple of vacant lots behind those buildings and fronting on Pine Street that we used to cut through, and then walk up to the theater entrance through the parking lot. Using that short cut, it only took us a few minutes to walk from our house to the box office. Very convenient.

I don’t remember in which year the whole block was demolished and the K-Mart was built, but I think it was in the late seventies. I wish that I had been able to get some relic from the theater. The hallway leading to the rest rooms had small versions of the chandeliers in the auditorium. One of those would have been a perfect souvenir, but I have no idea what became of them when the place was torn down. I hope that some collector got them, and they didn’t end up in a landfill somewhere.

Monterey Park has its own numbering system, with east-west numbers starting at Garfield Avenue. The unincorporated community of Garvey, which is now part of the City of Rosemead, was apparently on the numbering system of the City of San Gabriel during these years, and the east-west numbers started at Del Mar Avenue. The area has since been renumbered, and now uses the L.A. County system, with east-west numbers starting at Main Street in downtown Los Angeles. But the Garvey theater, now gone for some 25 years, was indeed just west of San Gabriel Boulevard, in what is now probably the 8100 block. It has always been difficult to find places in the San Gabriel Valley, because almost every little town has its own numbering system, and all the little towns run together in one continuous mass.

Most of those little towns in the South Bay also have their own local numbering systems, don’t they? I don’t think you’ll be safe from street-numbering confusion anywhere around Los Angeles!

I said in my post above that the Garvey was just east of the wash. I meant west! To the east of the wash was just a tiny triangle of land with a big billboard on it. (I think I need more sleep.)

I’m not sure that this is the same theater, but here are a few things about a theater called Garvey from the LA Times:

(March 23, 1949)
Possibility of arson in the early morning burning of part of the Garvey Theater, 716 E Garvey Blvd., Wilmar, was indicated yesterday as the Sheriff’s arson squad investigated suspicious factors of the $60,000 blaze. Lt. David Ostraff of the Sheriff’s arson detail found a broken window and indications that an arsonist might have poured flammable fluid on the rear seats, where the outbreak is believed to have originated. The fire spread to the attic and into the roof. The theater was unoccupied at the time. It required five engine companies to curb the fire. March 10 the San Gabriel Valley Theater, 330 W Las Tunas blvd., San Gabriel, was badly damaged by a fire which Ostraff said he thought was of incendiary origin.

(Dec. 15, 1950)
Under the direction of Capt. R.A. Cook, commandant of the station, the following theaters will hold the Christmas parties under this schedule: Dec. 21-Garvey Theater, Garvey, 10 a.m. to noon; Dec. 22-Tumbleweed Theater, El Monte;……

(June 27, 1953)
Evangelist Tommy Hicks will preach at a 7:30 o'clock revival series meeting tonight, winding up the first week of a campaign sponsored by the South San Gabriel Full Gospel Churches. Services are conducted each evening at 7:30 and at 10 a.m. daily except Saturday at the Garvey Theater, South San Gabriel. Sunday afternoon meetings are at 2:30.

Thanks, vokoban. This clears up some mysteries. That is indeed the same Garvey Theater, but it was built a bit earlier than I had thought if it was already open in January of 1938. I remember Mr. Greely, too, vaguely. He ran a small drug store across the street from the theatre, and also owned Greely’s Trailer Park. I had no idea his first name was Horace, though.

The second article names the Granada Theatre in Alhambra, which was later known as the Coronet and then the Capri. Now we can be sure that the first name change occurred after July of 1941. This theatre was also operated by Edwards, though I’m not sure just when they took over.

The date of the Garvey’s fire was a bit earlier than I thought it had been, too. I’d had the impression that the fire had happened about the time I turned five, but March 23rd 1949 was only two months and a few days after my fourth birthday.

The “San Gabriel Valley Theater” on Las Tunas mentioned in the fire article as the scene of a previous suspicious fire was the Edwards San Gabriel, posted at Cinema Treasures under its later name, Edwards Century. I wasn’t aware that it was one of the theatres which had had a fire.

The 1952 article about someone rehearsing at the theatre is a bit puzzling. The Garvey had no stage to speak of— just a small platform in front of the screen, not even behind the curtain, and no fly tower at all. They did have a magician perform at the theatre once, but that’s the only live event that I know of having taken place there. When the place was later converted to a church, I think they extended the platform out a few feet, sacrificing (no pun intended) a couple of rows of seats.

The 1953 article about the revival meeting confirms my vague memory that the Garvey was a church for a while fairly early in the decade. It later re-opened as a theatre, briefly, but when CinemaScope came along, Edwards didn’t think the place worth the investment for a new screen, and it returned to being a church, which it remained until its demolition.

Thanks again for posting this information. I’m a bit surprised that The Times contains so many mentions of this obscure suburban theatre.

Joe, the Kmart opened when I was young. I beleive in the early 80s cause I remember it opening. This Kmart only lasted a few years and was closed by the late 80’s, becoming a Builders Square store for a few years, then closing in the early 90s. It was vacant for several years before a Chinese supermarket moved in by the mid 90’s. I remember seeing them gut out the store, and they still had the Builders Square interior still there.

I lived in Rosemead until August of 1986, so I remember when they built the K-Mart, but not the exact year. I was only in it once, in 1982, I think. I think the Garvey Theatre and the rest of the block were demolished close to the end of the 1970’s, or maybe as late as 1980. Even with an opening date before 1938, the Garvey was probably a church for longer than it was a theatre.

How many times has this town’s name changed? Has it been Wilmar, Garvey, and Rosemead? Very confusing.

Wilmar was actually a bit farther west (The Times probably didn’t know too much about the area.) Shortly after 1950, the unincorporated communities of Wilmar, Garvey and Potrero Heights were consolidated (by the post office department, I think) under the name of South San Gabriel. Incorporation was attempted a couple of times, but eventually the locals gave up and most of the place ended up being annexed by the city of Rosemead in the 1960’s, with a few parts being annexed by San Gabriel, Monterey Park, South El Monte and Montebello. Most of what was once Potrero Heights remains unincorporated even now though, and still goes by the name of South San Gabriel.