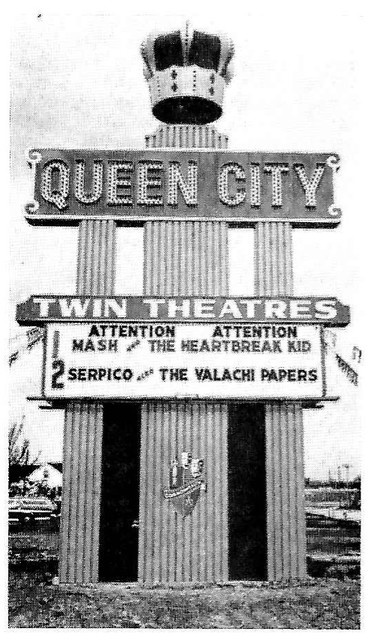 Opened March 29, 1974 as the Queen City Drive-In accomodated 800 cars in its two screens. It was the last drive-in to open in the Springfield area. It had a short life of only eight years and closed on September 29, 1985.

The site is now a Sam’s Club

I managed the Queen from 1978, when I closed the Springfield Drive-In, until 1979 when I left to go to college. The style was modeled on the Holiday Drive-In,which had been rebuilt a few years before, except it was much more expensively done, as it also was the office for the City Manager,at that time Russell Cox.The outside was brown brick with turquoise and white trim, the bathrooms were bright white tile with red formica counters,the concession was dual laned with white tile on the walls and turqoise and white counters with black formica tops. The offices, Russell’s and mine, were expensively paneled in dark brown wood and modern wooden office furniture. A unique feature was the projection booth, actually on the second floor above the concession stand, unlike the Holiday, where it was at the rear. We showed first releases often, but the mainstays were second runs and theme marathons,especially after the Springfield closed and we show the occassional “R” rated marathon on the screen facing away from Sunshine Street!

Also, I forgot. The Queen did not open in 1978, as Mr Bibber states, but in 1970. I’ll have to dig out my dedication photos with Frank Jones, the District Manager, at the time. Sorry.

Boxoffice announced in its issue of May 7, 1973, that construction had begun on the Queen City Twin. There was a small photo of the groundbreaking featuring three Commonwealth Theatres executives. The plans for the project were by Milton Costlow & Associates.

My Father was projectionist there and many other theaters in Spfld. My brother and I grew up there. There were alot of good memories there and some not so good. I will never forget that place.
Dan Martin

The name of the street the Queen City Drive-In was on was Sunshine Street, not Sunrise. The wrong street name has sent Google Maps on a wild goose chase, ending up several miles from where the theater was actually located.

This opened on March 29th, 1974. Grand opening ad in the photo section.

Commonwealth Amusements closed the theatre with “Six Pack” and “Stroker Ace” on the screen facing the road and “Campus Teasers” and “Sugar Lips” on the screen away from the road on September 29, 1985. But the highlight of the final month had to be the Dusk to Dawn Labor Day marathon with “Savage Streets,” “Chained Heat,” “Caged Heat,” “Concrete Jungle,” and “Avenging Angel.” Those who made it from beginning to end got a free breakfast.

The Drive-In screens and equipment were removed for use elsewhere.