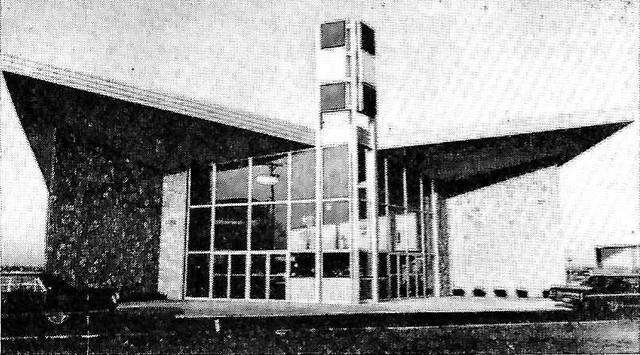 The Fox Kettering Theatre was opened by National General Theatres on December 27, 1966 with Peter Sellers in “After the Fox”. It was later owned by Mann Theatres before being sold and twinned by Chakeres Theatres in 1975. Chakeres also changed the name to Kettering Cinemas I & II. This theater is a twin sister to the now closed Fox NorthWest “Cinema North” which was sold by Chakeres Theatres to Showcase Cinemas in April 1988 which is located in Dayton.

Kettering Cinemas had been a second run theatre since the late-1980’s, but starting November 2004 Chakeres began running Kettering as a first run house with “The Grudge” and “The Incredibles”.

The Kettering Cinemas I & II was closed in January 2006.

Kettering Cinema had a ninety-foot wide, convex screen and seated 904 patrons. The last movie to show on the large screen was “Goin' South”, John Belushi and Mary Steenburgen’s screen debuts and directed by Jack Nicholson. The theater was closed in the fall of 1978 and ‘twinned’. Kettering Cinemas opened on December 15th with “King of the Gypsies” and “Oliver’s Story” Even though both theaters were only partially ready, neither film sold out the 30 seats that were available.

Thanks for the update. What a shame. Stored a lot of memories from that theater.

Back in the 90s, I remember the management of this theater going through all the bags people carry in, inspecting them for food. They had this obsession with you buying ONLY the over-priced stuff from their concession stand. This was the only theater I ever knew to do this. I have a feeling that this contributed to their downfall.

Even more recent photos are on Cinematour.

This and the Northwest Plaza were both built and opened by National General Theates.

Southernlandthief’s comments are bringing back some good memories. I attended a showing of the Jack Nicholson film GOIN' SOUTH at this cinema. My friends had smuggled in some Schoenling Little Creme Ales (local beer) and accidentally got them rolling down the aisles LOL!

I likewise saw KING OF THE GYPSIES after the cinema was twinned along with ALL THAT JAZZ, and many others. The cinema went to a 2nd run format during the late 1980s if I recall. The decision to go with first run films again surprised me. Since I lived less than a block from this cinema, I attended many showings. Many people I knew said they wouldn’t see 1st run films in such a rundown theater.

I think the decision to close the cinema down was a result of a new multiplex opening 2 miles up the road. The decision to close came quick. There was only a one day notice. Unfortunately, I was unable to attend that last night and I regret it. I miss that cinema because there was so much history in those walls.

This opened on December 27th, 1966. Grand opening ad in photo section and below. The Fox Kettering was one of a pair of almost identical houses opened by National General in December, 1966, the first having been the Fox Valley Circle Theatre in San Diego,opened on December 23.

These theaters were designed by Harold W. Levitt & Associates, with William H. Farwell and Ernest W. LeDuc, and at least two more were later built on the same plan: the Fox Northwest Plaza in Dayton, Ohio, opened in December, 1967, and the Mark Twain Theatre, Sunset Hills, Missouri, opened in August, 1968.

Saw “Murder on the Orient Express” here when it was first released in 1974. Many fond memories of this theater.