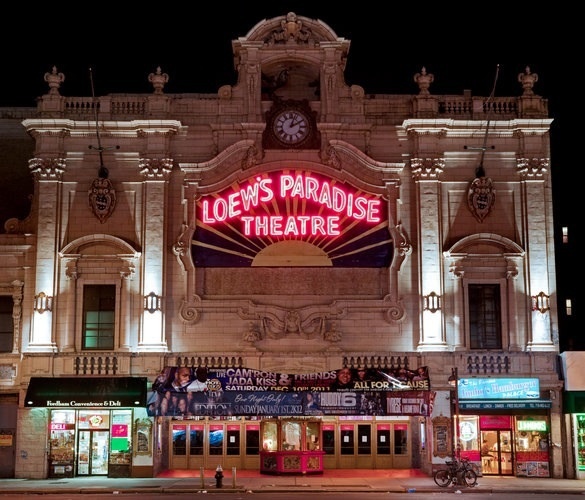 The 23rd largest movie theatre ever to be built in the USA was commissioned by the Paramount/Publix chain and was to be named the Venetian Theatre. Paramount/Publix withdrew from the project shortly before construction began and it was taken over by New York’s largest movie theatre chain, Loew’s Inc. The design was adapted to become one of the five ‘Wonder Theatres’, named after the Robert Morton ‘Wonder Organ’ which was installed in each of them.

The first ‘Wonder Theatre’ had opened in January 1929, the Loew’s Valencia Theatre, in Jamaica, Queens. The Loew’s Paradise Theatre in the Bronx was joint-second to open, on the same day with Loew’s Kings Theatre, Brooklyn. These were followed by the Loew’s Jersey Theatre, Jersey City, NJ and finally the Loew’s 175th Street Theatre in Washington Heights, Manhattan.

The Loew’s Paradise Theatre was one of the last ‘Atmospheric’ style theatres built towards the end of the movie palace building boom. John Eberson, the architect who designed this $4,000,000 deluxe picture palace, was famed for his ‘Atmospheric’ theatres and the Bronx Paradise, is perhaps the greatest example of his work to survive since the demolition of the Paradise Theatre in Chicago (1928-1956).

Here on the Grand Concourse, where local ordinance forbids the use of large vertical signs, the façade is restrained and dignified. On top of the frontage, over the entrance, is the space originally occupied by a mechanical Seth Thomas clock, where hourly St. George slayed a fire-breathing dragon. As the Bronx Paradise fell foul to vandals in later years, the figure of St. George was stolen. A similar device, now renovated, was also installed at the Loew’s Jersey Theatre, Jersey City, NJ.

The main lobby, reached through a set of bronze doors from the outer lobby, features three domes in the ceiling containing painted murals depicting ‘Sound, Story and Film’. In the center of the north wall, beneath a statue of ‘Winged Victory’, was a large Carrara marble fountain featuring the figure of a child on a dolphin. At the base of the Grand Stair hung an oil painting of ‘Marie Antoinette as Patron of the Arts’ and a copy of artist Holbein’s ‘Anne of Cleves’.

The auditorium was designed to represent a 16th century Italian Baroque garden, bathed in Mediterranean moonlight, with stars twinkling in the ceiling as clouds passed by. Hanging vines, cypress trees, stuffed birds and Classical statues and busts lined the walls. The safety curtain was painted with a gated Venetian garden scene, which continued the garden effect around the auditorium when it was lowered.

After the Great Depression, live acts were dropped from the program schedule and the Paradise became a regular first run movie theatre. In the late 1940’s a concrete slab was installed over the orchestra pit to create four extra rows of seats. It covered the orchestra pit and organ console. The slab was lifted only once, in the 1960’s, to enable the removal of the organ console, which with the rest of the organ pipes has now been installed at the Loew’s Jersey Theatre, Jersey City, NJ. which had its original organ removed in 1949 (and that is now installed in the Arlington Theatre, Santa Barbara, CA)

Over the years, many features and fittings in the Paradise ‘disappeared’ and by the late-1960’s it was on the market for redevelopment, opening only for evening performances. The theatre was twinned on December 19, 1973, then in 1975 it was triplexed and in 1981 was divided into four screens, hiding practically all the original auditorium interior behind drop ceilings and panel walls.

The Paradise Theatre closed in January 1994 and lay empty for six years. By November 2000, work had begun on removing the four-screens and a restoration, but this was halted due to an ownership rights dispute with the restorer. A new owner took control and completed the renovation, re-opening in October 2005 as a live theatre and special events venue named Utopia’s Paradise Theater. In November 2012 it was leased to a church.

The theater is a New York City Registered Landmark building, for both the façade and the interior. Listed on 16th April 1997.

The Paradise was never an “independent” cinema, always operated by the original Loew’s (and successors) from opening to closure.

My father worked in the Bronx and in 1977 he would bring my brother and to see the original Star Wars there on Wednesday’s when our Catholic grammar school would let out early to allow for religious instruction for public school students. I was only seven years old, but I remember the theater being huge and beautiful.

It must be one of the few theaters to be mentioned in an Academy Award-winning Best Picture and Best Screenplay. From “Marty” (1955), partially filmed on location in the Bronx: “I hear there’s a good picture in the Loew’s Paradise”.

Named after the founder Marcus Loew (pronounced low). So “Lows”. Or NYers of a certain age might say, Low-eze.

By 1969 the apostrophe was removed and it became Loews. Under Sony ownership did it get SDDS in the theater?

This is now the World Changers Church, where the funeral of the assassinated police officer Miosotis Familia is being held. Link to NY Daily News article about sprucing up the venue in preparation for the funeral.

Article: NYPD employees touched up the exterior of a Bronx church Sunday in preparation for the wake and funeral for Officer Miosotis Familia.

The civilian workers in the NYPD’s Building Maintenance Section added a fresh coat of gold paint to decorations outside the World Changers Church on the Grand Concourse — a small show of appreciation for the mother of three killed last week in the line of duty.

The employees said they were honored to contribute to Familia’s wake, which will be held Monday from 2 p.m. to 4 p.m. and 7 p.m. to 9 p.m. Her funeral will follow on Tuesday at 10 a.m.

Parishioners also said they were eager to help however they could at the church — which was once the majestic Loew’s Paradise Theater. It has a capacity of around 4,000.

Officials anticipate over 20,000 will attend the funeral.

A mentally ill cop-hating assassin shot Familia, 48, as she sat inside an NYPD mobile command unit at Creston Ave. and E. 183rd St. around 12:30 a.m. Wednesday. The 34-year-old killer was shot to death by police a block from the murder scene in Fordham Heights.

Drove by the Bronx Paradise recently and noticed the building covered in scaffolding. Does anyone know what’s being done? Also noticed large signage offering office space.

Here is a Youtube video I found from 2020 that briefly mentions and shows the front of this movie theater. Start the video at the beginning and the segment ends at 3:44. If you then fast foward to 10:50 you can see the stores where the RKO Fordham used to be. If you then foward the video to 1 hour 1 min. you can see where the Savoy AKA Cinelli’s theater was. The rest of the video is a nice walk thru and disussion of the Fordham and Little Italy sections of The Bronx. Some people may find a few of the comments on this video “politically incorrect”. Please keep any comments you may have here to just the movie theaters and old memories. You can always comment about anything you want on the Youtube video page itself if you sign in. Enjoy! -> Youtube