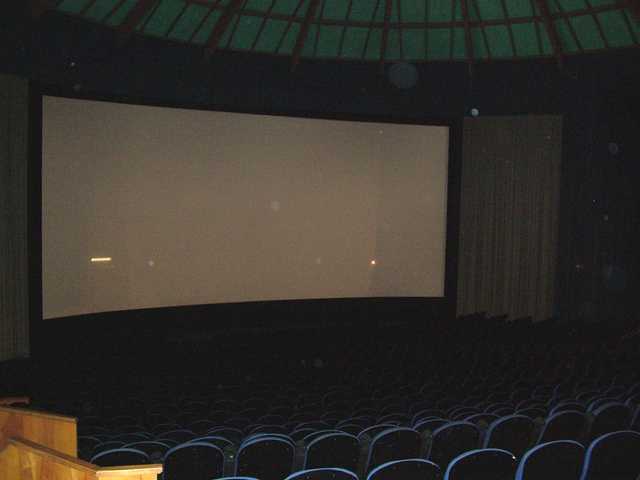 Century 22 was opened in March 1966 as a Super 70mm venue. During the 1970’s two smaller dome theaters were added to the front of this larger theater dome, bringing the total number of screens available to three.

Of the two smaller screens, dome ‘B’ was retrofit with a digital projector for the release of “Star Wars Episode II: Attack of the Clones” in 2002 and as of this writing is still very much in use with a digital version of “The Incredibles” having just been released.

The ‘A’ house is where the BIG screen resided, though somewhat diminshed by it’s reformating to a flat-screen back in 1992 (along with the Century 21 screen), it still captivates most all who see it. Business for both Century 22 and it’s sister theater 21 remained brisk, giving both venues a bright future, until they were closed in March 2014. The original Century 22 ‘big’ screen was demolished in August 2019.

Screen and curtains and dome design similar to the late and great UA 150 in Seattle built in the 60’s and torn down sadly a few years ago. Was a weed filled empty lot for years and now another oversized and cookie cutter highrise in the ever expanding downtown Seattle. Only about 4 original grand theatres left in that city downtown. This was one of the best. The famous Cinerama still is succssful there. Was restored years ago.

Again — same architects between the UA 150 and this building.

On the issue of these theaters closing – With some serious funding from some serious supporters, the Century 21 could become a class act entertainment destination in the heart of the Silicon Valley once again. With some minor changes to the exterior, lobby and auditorium and a few major changes to the projection booth and screen, this theatre has the potential to be a first-run, 3D digital movie theatre, a one-of-a-kind single-screen IMAX venue and even a Cinerama-capable auditorium (as it was originally constructed to be) all in one. Just see what Paul Allen did for Seattle’s Cinerama Theatre and what the Pacific Theatre chain did for the Cinerama Dome in Hollywood. The developers even built around that one and both sides won. The issue here is that we have wealthy corporate executives and we have dedicated, film-lovers who appreciate what these screens were in the past, what they are today and what they could be in the future. The problem that we face is that we do not have both qualities in the same person who is willing to swoop down and save the day, like Superman did for me in 1978 (another classic film I watched at these domes – technically across the street at Town & Country, which was still considered to be a part of the old “Block” Century Theatres complex).

My fondest memory of Century 22 in San Jose was waiting in a long line on blankets through the center of the parking lot for the original “Star Wars”. Years later, in the early 1980’s, I would work for Syufy as an Assistant Manager at Century Almaden (five-house theatre at Blossom Hill Rd and Almaden Expressway) and help out occasionally on the Big Block, mostly for Ron Giffen at Century 23 or Bill Tannehill at Century 21. I met Ray Syufy Sr. once when he came to Century Almaden to decide whether to split the center big house in two, but he never did. Sometime later while working the door at Century 23 a younger man walked up and said he was Ray Syufy and he wanted to see the manager. I chuckled, since I had already met Ray Syufy. I went to the office and told Ron Giffen some guy said he was Ray Syufy and wanted to see him. Ron exclaimed, “That could be Ray Syufy, Jr.!” I was mortified.

Still years later after having left that profession I was at Century 22 for the first showing of “Back to the Future III” with a friend. They were going to show all three movies in a series in the big A house. We waited in line, but it sold out when we were about 20 people from the box office. Disappointed, we bought tickets for some other movie in one of the other two houses. We bought a ton of food at the concessions stand to fill our arms, then walked right past the guy guarding the door to the A house and sat in the very front row for all three movies. There are so many other stories about these grand theatres — good times. Now they are closed and will likely be gone soon like Century 24 and 25.

Where did my Friend Mr. Bill Williams go after they closed the Century 22?

I was in the area last night, and they recently just tore down the Century 22 for their new bland office project. 23 is still standing, although the sign is gone, so I’d believe they’re prepping for that to bite the dust too. You might want to change the status to “Demolished”.

Such is life…So sad. All that’s left is the original Century 21. For how long nobody knows.

The Stevens Creek/Winchester movie theater corridor is NO MORE! 😫😫