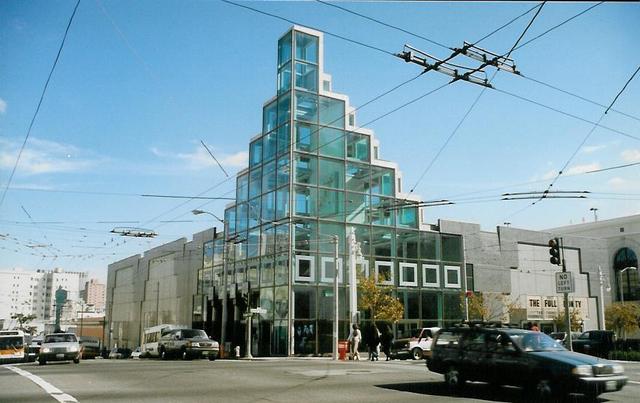 A San Francisco fourplex along the Van Ness Avenue corridor. Built for United Artists at a cost of $7 Millions, the Galaxy opened on February 17, 1984 with THX certified sound.

The galaxy was one of nine theaters across the US to feature an exclusive one-time showing of the entire Star Wars trilogy on March 28, 1985.

od_sf – You’re thinking of the Coronet Theatre, which played that 1985 single triple bill performance for the Bay Area. Coronet-San Francisco was a huge and venerable single-screen. The Galaxy, while very nice and having THX, was a multiplex with smaller auditoriums. In Los Angeles, however, the triple bill did show at two locations: UA Egyptian Theatres-Hollywood (in the original Grauman’s portion, which was an enormous palace back then [before Cinematheque butchered it in 1999]) and GCC Avco Center Cinemas-Westwood (a multiplex but one with a decent size main auditorium then [befoe it too was carved up in 1993] and THX).

Saw “The Color Purple” there. The auditorium we were in had a nice size screen and great sound system with the screen having curtains that opened and closed. Lobby had a interesting layout with the pay phones and restrooms upstairs. Only went there a few times. It seemed that no one seemed to miss it after it was demolished.

I have one great memory of this theater. No, it wasn’t anything like the best theaters in the city (I miss the Coronet!), but you had to be there when ‘Desperately Seeking Susan’ opened in 1985. My sister and I had to wade through a sea of Madonna wanna-bes, which showcased the absolutely worst of 80’s fashion and hairstyles. Fun movie, though. Not an attractive theater (but really good sound, as I recall).

i went to this theater a number of times whenever i visited San Francisco. for instance i saw Sofia Coppola’s first film “The Virgin Suicides” and “The Favor” with Brad Pitt. if i am not mistaken this theater most have the shortest lifespan of any modern built movie theater.

Big Joe a lot of theaters don’t even make it that long. The Brookhaven Multiplex on Long Island lasted 18 years, the Five Towns, Raceway Cinema and others even less. Now a days it’s common to tear down and rebuild rather than upgrade. All properties are leased these days. There was one on CT the other day that didn’t make it past the first year.

i thank robboehem for your reply. when i discovered this wonderful site late January 2013 i looked up all the movie theaters i remembered from my trips out to L.A. and S.F.. so i was shocked that a modern built state of the art movie theater had such a short lifespan. the only theater in Manhattan that comes close is the 62 St. & 1st Avenue multiplex built by Cineplex Odeon which opened the fall of 1992. it closed down a few years ago and is just standing there bordered up and unused.

speaking of which. i read in the intro that this theater wasn’t demolished until almost 6 years after it closed. so i was just sitting there for 6 years gathering dust?

This theater sat boarded up with all the glass still intact and the concession stands too. They turned it into a CVS drugstore.

The new building on the site of the old Galaxy at 1285 Sutter is a14 story apartment building with a CVS on the ground floor.

bigjoe59…..the redevelopment of this lot was delayed by the 2008 recession when practically nothing got built and the notoriously slow pace of the SF Planning Dept.