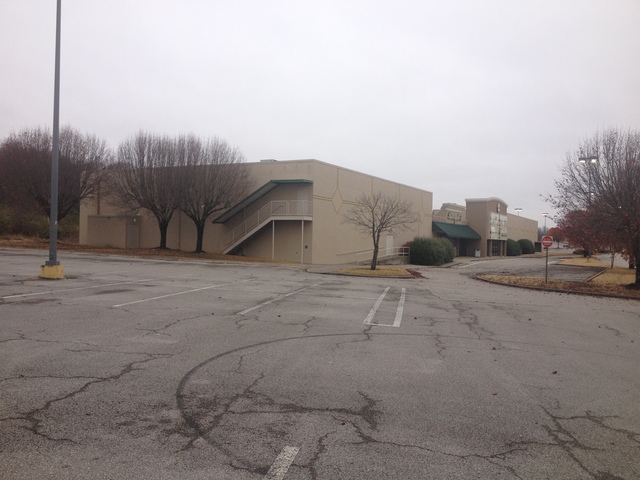 Opened as the Rivergate Twin by Martin Theatres on April 19, 1973. In April 1983 it was remodeled and became a six screen. Then in 1987 two more screens were added and it became the Rivergate 8. Carmike took over operations in 1985 and they closed the theatre in 2013.

Here are a couple of recent photos of the Rivergate.

<<< *Opened as the Rivergate Twin by Martin Theatres in 1983. In 1985 it was remodeled and became a six screen. Then in 1987 two more screens were added and it became the Rivergate 8. Carmike took over operations in 1985 and is still operating the theatre. * >>>

I’m not sure those dates or screen-count timeline is correct. Can someone please clarify or double-check reliable sources?

I ask because I have notes and newspaper ads indicating “Jaws” ran here in 1975 in what was at least a 4-screener, and that the place was at least a 6-screener in 1984 for “Indiana Jones And The Temple Of Doom.”

It would appear this theater opened several years before 1983.

In 1975 Coate’s newspaper ads will probably show the 1&2 (Rivergate Mall) and the 3&4 (Rivergate Plaza) theatres. Again, those were two different theatres.

I believe the original description is correct in that the twin became a 6-plex, and then eventually an 8-plex.

Other than the Belcourt, this is the only Nashville-area theatre from 1976 that is still operating to my knowledge. The drive-ins are all gone, and many theatres have been built and closed since then.

There’s a lot of information here:

It says the Rivergate Twin opened in 1973.

This theater is now closed.

i wish they would reopen this theater and show second run movies i miss going to the movies there.