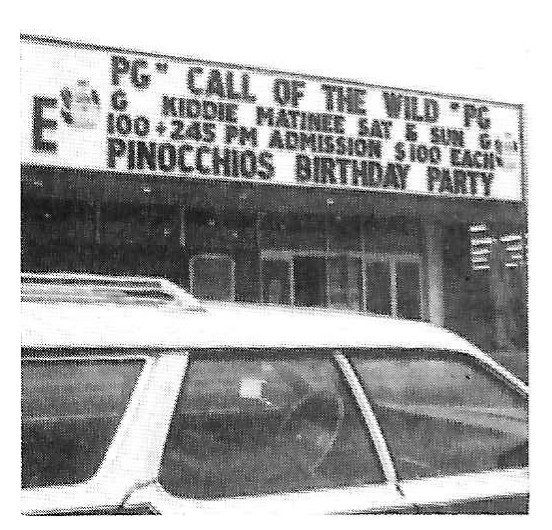 The Martin Plaza opened in November 23, 1971 by Martin Theatres. It was located in the Hollywood Plaza. Carmike took over operations in 1985 and operated the Plaza until it closed in July of 1997. It has since been torn down.

This theatre apparently was leveled sometime ago. The Hillwood Plaza is in very poor shape and has only a handful of tenets. None of the existing structures even faintly resemble a cinema.

I used to manage the theatre in the early 90’s. The carpet was harvest gold, to match the seats. The seats were Massey Rockers, which were very comfortable. It was a discount theatre while I was there, and had been for years. Unfortunately the building was torn down to make way for a grocery store the last that I heard.

Food Lion didn’t last long and is also gone now. I never understood why they’d put up a grocery store there with an H G Hill grocery right there by it. (This H G Hill is independently owned, so not gone bye bye like the ones in Bellevue and Green Hills.)

Currently the site of the old Hillwood Plaza shopping center (Walmart used to be on the other end opposite where the theatre was) is part of the Nashville West Shopping Center project that’s begun construction. You can read some about it at the web site for the project … www.NashvilleWest.com … So far it’s been reported various places that there’ll be a Costco, Dick’s Sporting Goods, Best Buy and some others. Improvements are being made to H G Hills park. It’s supposedly going to be a major improvement and welcome addition to the community. I hope so, because that area has just been so dreary for years now. About time something was done with it.

Oscarrie, I miss the theatre! I remember fearing I’d laughed myself into labor back in spring of 1980 when I was pregnant with my eldest son and my husband and I had gone there to see 48 Hrs. I didn’t want to miss the end of the movie and didn’t say anything until it was over. (Turned out I wasn’t in labor … probably just laughing so hard it made the baby kick more!) I was sad when the Plaza closed after having been a 99 cent theater for a while. After that it just felt to me like there was nothing fun to do around here anymore. Hopefully the Nashville West Shopping Center will bring life back to this particular area.

I have two hundred and fifty Massey Rockers I saved from destruction. When they did the demo on Movie Land in Eugean, Oregon
They are really beautiful. I am trying to find them good homes.
Steve Tenhonen

I have two hundred and fifty Massey Rockers I saved from destruction. When they did the demo on Movie Land in Eugean, Oregon
They are really beautiful. I am trying to find them good homes.
Steve Tenhonen

The Plaza is where I saw “Raiders of the Lost Ark.” I think I was the last Nashvillian to finally see Indiana Jones on the screen. It’s still one of my favorites.

This was once a Martin Theatre.

A Firestone Auto Center is at this location now.