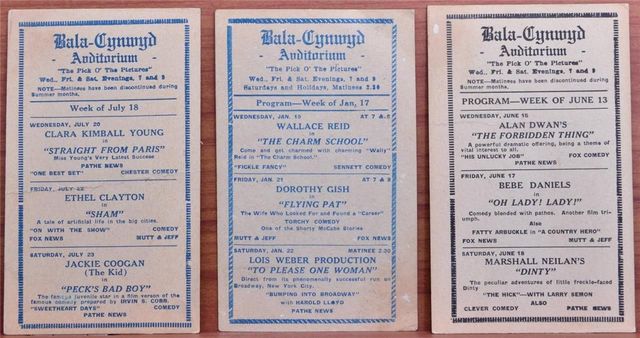 Opened as the Egyptian Theatre on September 15, 1926, in the Montgomery County suburb of Philadelphia. The movie palace was designed by Philadelphia architects Hoffman-Henon Co., and had 1,450 seats including a balcony. The theatre was opened as a Warner Brothers theatre. The façade has an Egyptian Revival theme which extends to the two side wings containing retail stores.

After a vestibule lobby is the main lobby. A set of grand stairs leads upstairs to the mezzanine promenade and restroom suites. Best viewed from the mezzanine is a mural of Cleopatra and her attendants. The mens' suite has a furnished lounge. The balcony is no longer available to the public and is now partly used by the current projection booth. The original projection booth, no longer used, is above.

On March 16, 1955, A.M. Ellis Theaters Co. chain took over the theatre from Stanley Warner, renamed it the Bala Theatre, and operated it into the 1980’s. In 1987, the Sotolidis family purchased the theatre to save it from closing. The Bala Theatre is featured in David Naylor’s 1987 book, the National Trust Guide ‘Great American Movie Theatres’. Photographs taken during the run of “The Mask” (1994) show the exterior and auditorium and are on view at the website of HABS (Historic American Buildings Survey) of the Library of Congress. 1993 epics shown include “Gettysburg” and “Schindler’s List”.

In early-November 1994, the Bala Theatre closed for triplexing, and reopened March 3, 1995 with “Boys on the Side”, “Billy Madison” and “Shallow Grave”. Architect Mitch Abromowitz of Fountainhead Associates in Lansdale designed the sensitive triplexing of the huge auditorium. Abromowitz was reported in an April 10, 1995 Philadelphia Inquirer article as stating that he had worked 30 years on theatre renovations including for owners who only inserted walls down the middle of their auditoriums despite the historic architecture. He was pleased that brothers Constance and Isaac Sotolidis, the Bala Theatre co-owners, were concerned about keeping the historic interior. Contractors viewed the sensitive triplexing as a loving rejuvenation of the theatre, and trusting the owners, were willing to accept deferred payment for their fees for the expensive undertaking.

The still very large middle auditorium with 427 seats has the stage constructed for vaudeville, the proscenium arch with its huge movie screen, organ lofts, and ornate front exits. Also on view in the middle auditorium is most of the gorgeous plaster Egyptian ceiling relief, including the four Egyptian figures. Part of the plaster ceiling extravaganza is depicted in a 1928 Voigt Company catalog. Two additional auditoriums created from the side seating have 192 seats each and screens that are 21 feet wide, 11 feet tall.

After the triplexing, the Bala Theatre was very well attended. Movies shown in the middle, main auditorium in 1995 included “Apollo 13” and “Casino”. The Bala Theatre has shown both mainstream and arthouse films, but since the 1995 triplexing has shown mainly arthouse films. Curtains (which in the side auditoriums are vertical) ceased to be used in 1996. In 1998, Clearview Cinemas began to operate the theatre under a lease, and movies shown that year by Clearview Cinemas in the middle auditorium included “Life is Beautiful” and “Shakespeare in Love”. On June 29, 2000, AMC TV hosted a free screening of “Psycho” (1960) with Janet Leigh appearing in person. Many Woody Allen movies have been presented. First run movies, especially art films, have long been the primary fare at the Bala Theatre, though in recent years mainstream 3D movies have also been shown. In June 2013, Bow-Tie Cinema took over, but on August 9, 2013, Bow-Tie Cinemas relinquished this theatre and the only other Pennsylvania theatre that it and Clearview had operated, the Anthony Wayne Theatre, to Reel Cinemas, the company run by Greg Wax that operates the nearby Narberth Theatre.

After the Thanksgiving holiday weekend, on December 1, 2014, the Bala Theatre was closed with “Fury” in one auditorium and “The Judge” and “Guardians of the Galaxy” in the other auditorium, all presented on 35mm film. The middle auditorium, the only one to have been equipped with a digital projector, had been closed since early-August 2014 after a showing of “A Most Wanted Man” since the digital projector was broken.

In January 2018, the Bala Theatre was awarded Class I designation on the Lower Merion Township Historic Resource Inventory.

Contributed by bryan, Howard B. Haas
Get Movie Tickets & Showtimes

I captured that photo long ago from a website that belonged to the Bala Theatre, not any such individual.

Where is it then? It’s not in the Photos Section or linked to in any of the Comments. Because I always check first. If you posted it before it appears to be gone now. I can only credit the sources I get them from. If they don’t credit the original sources, there is no way to know where any of them come from. And I often do a reverse image search on many. I always give proper credit whenever I can. I’ve posted over 2,300 photos to CT in over 10 years. Be glad that it got posted for others to see. Because it does not appear to have been posted previously.

I didn’t mean from this site. I meant from an official website of the theater itself when still open. That’s what I noted in my own photo gallery on my computer, where I have more of them. FYI, originally, the rules of this website were to post photos we ourselves taken, albeit those rules aren’t being enforced anymore.

I understand. I am familiar with the original rules. Unfortunately even the CT Admins know that there would likely be no photos whatsoever for many of the theaters listed, if they relied solely on those taken by the individual members posting them. Because literally thousands of the theaters have been gone for over 50 years. Unless someone is a CT member, who just happens to find their dad’s shoebox full of old theater pics and posts them here, they would never see the light of day. As long as we make every effort to credit the original photo source whenever possible, all is good. That’s why there are 9 different types of licensing to choose from, whenever posting a photo. I even make sure to use the Copyright license, when I know that the image is such or from a given collection. If someone on Facebook has a story that relates to the photo used, I post that too giving them credit for the copy.

I’m sure you’ve noticed on many of the pages, that they sit dormant for upwards of 5 years before newly found photos are ever posted. That’s why I alert the list in the comments about the photos I post, as well as having posted them. It sometimes revives interest in the given theater, and sparks memories from those who have commented in the past. When they see a new angle or old promotion the photos may portray. (Or the new stories that accompany them as I mentioned above.) Hopefully CT and all the photos will remain long after we have left this earth. I feel that’s kind of the point of CT. That’s also a reason to actively re-post photos in the Photos Section, that were previously in now dead links in the Comments. Because early internet links seem to be drying up. As people stop paying for the hosting. Even the Library of Congress site is not connecting properly.

I guess the longer this sits closed, the more likely it will deteriorate and likely be torn down or stripped down

Mark, this was one of my favorite theaters, until it closed for decades if I wanted to see a film, this is where I went. Last week Lower Merion designated it a Class A resource, because of such concern. I hope one day it reopens for movies.

This was the post by the Lower Merion Conservancy last week at Facebook: The Bala Theatre was awarded Class I designation on the Lower Merion Township Historic Resource Inventory last night! The Conservancy, which included the theatre on its annual WatchList five times during the past six years, is thrilled with this news.

The theatre is a landmark in Lower Merion. More importantly, it is the keystone of historic Bala Avenue and crucial to the revitalization of the commercial district. The Conservancy is appreciative of the Board’s support for this designation. It is also grateful to its many dedicated members, to the Lower Merion Historical Society, the Neighborhood Club of Bala Cynwyd, and the Lower Merion Historical Commission for relentlessly pursuing a positive preservation outcome for this iconic building.

When I cleaned screens for Clearview years ago I was impressed at how it was tripled. Very unique. Lets hope it gets going again.

This was reopened as Bala on March 16th, 1955 by Ellis theatre. Grand opening ad posted.