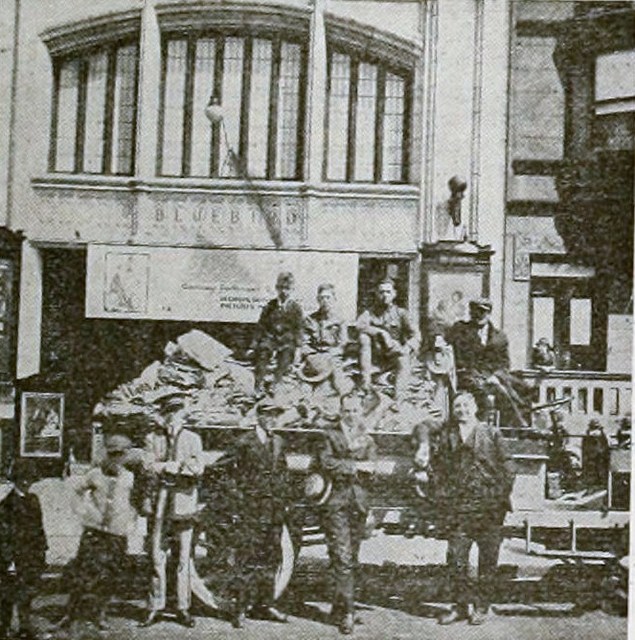 The Bluebird Theatre was opened on October 19, 1914 and designed by architect Mahlon H. Dickinson. Located on N. Broad Street, across the from the later built Uptown Theatre. It was equipped with a Haskell 3 manual pipe organ which from 1923 to 1925 was featured in weekly radio broadcasts.

A few years later, the theatre was remodeled by the architectural firm of Hoffman-Henon Co. It was remodeled again in 1936 to the plans of architectural firm Thalheimer & Weitz in a Streamline Moderne style. The Bluebird Theatre went over to become an African-American movie theatre from 1947 and closed as a movie house in 1957, and became home to a church. It was demolished in 2020, to be replaced by a residential building.

The Bluebird’s marquee can be seen in this 1924 photo from phillyhistory.org:
http://tinyurl.com/qj3bgl

For some reason, Google has put the Street View for this address on Watts Street, at the back of the building. If Street View is moved around to Broad Street, you can see the fairly well preserved Gothic upper facade of the Bluebird Theatre. The ground floor has been covered in what looks like a rusticated fake stone of the sort that was popular in the 1950s.

Architect Mahlon Dickinson is also supposed to have designed a 499-seat theater called the Owl, which Irvin Glazer’s Philadelphia Theatres, A-Z says operated from August, 1913, to 1928. Web site Philadelphia Architects and Buildings gives the address of the Owl Theatre as 2300-2302 Grays Ferry Avenue, but as near as I can tell, that address was part of the grounds of the Naval Home, which was established in the 19th century and operated there until the 1970s.

It makes me wonder if the Owl’s reported address might be mistaken. There’s a building in the 2200 block of Grays Ferry Avenue that looks as though it might have been a theater at one time (Google Street View.) I wonder if that could have been the Owl? The Glazer collection is supposed to have a photo of the Owl, but it doesn’t appear to be available on the Internet.

The original architect always receives credit for their work. Any subsequent additions and/or alterations should include a description of that addition and/or alteration, the year and its respective architect. If two or more architects collaborate on the same project, the architects may be credited as to their contributions.

Joe Vogel, you are correct with your streetview suggestion. That is the Owl Theatre, which in ads general listed its address as 23rd & South (It fronts both Grays Ferry Ave and South St, wrapping around a now-vacant corner lot). The streets are kind of confusing there, because in that block 23rd St more or less merges into the diagonal Grays Ferry Avenue for one block, but the buildings in that block have 22xx Grays Ferry Ave addresses.

The owner of the Owl Theatre building just recently began renovating it into retails spaces; prior to that, it had served as a warehouse for a fine art dealer, until several years ago.

A major refresh was conducted in 1936 by architects Thalheimer & Weitz including air conditioning, a new marquee with silhouetted lettering, and a bathing in royal blue and stainless steel for a streamlined moderne makeover. The theatre closed at the end of a 15-year lease with “Dancing in the Dark” and “Brimstone.” It found new operators and continued, apparently, as a theatre for African American patrons until 1957.