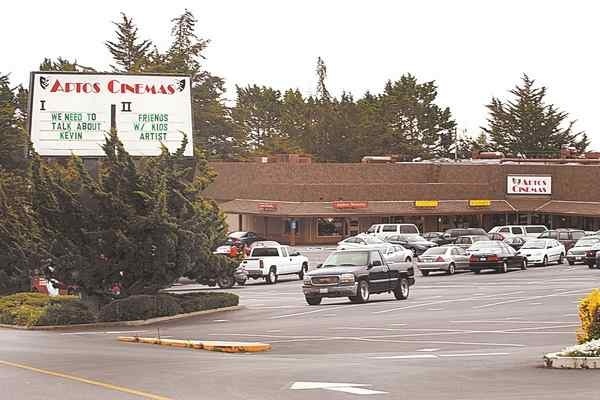 Each is furnished with Heywood-Wakefield seats. The seats are the metal backed style that Heywood offered in the late-1960’s and early-1970’s. The theatre was operated by Culver Theatres, Inc., followed by Nickelodeon. In November 2015 it was taken over by Landmark Theatres. It was closed in January 2016.

From age 10 to 21, I grew up in Aptos. Most of my moviegoing was at the Capitola Theatre and 41st Ave. Playhouse in Capitola, or the Rio and Del Mar in Santa Cruz. However, we did occasionally go to the Aptos Twin. Somewhere I remember reading that this theatre was built in 1961, certainly the architecture of the Rancho del Mar shopping center would support this, but that would put the Aptos Twin in the catagory of an extrememly early twin cinema. It is located in one corner of the shopping center in a building which contains offices and retail space as well. The lobby is long and narrow, and the two auditoriums open off of it in opposite directions. The interior was very plain. Someone had painted a mural of a 1930s era Mickey Mouse on one lobby wall, and there was a large collage of photo cutouts of various movie subjects on the wall adjacent. The auditoriums were constructed of cement block, and draped with olive colored pleated fabric, with matching curtains which were still used when I last went there in the mid-Eighties. I’m not sure about the smaller auditorium, but the larger had a carpeted thrust stage in front of the curtain, with a few steps leading up to it.
For much of its life, the Aptos Twin was a United Artists operation. Its original marquee sign tower, which stood out in the parking lot, was a classic piece of Sixties signage. It was “trimmed-down” and made more generic in the 1990s, and the United Artists logo applied to it, as well as new reader boards and letters. The sign remains much the same today, but with the United Artists logo gone and “Aptos Cinemas” replacing it in red Broadway font.

The operators of the Santa Cruz based Nickelodeon & Del Mar cinemas will soon be re-opening the Aptos Twin.

When I was an assistant manager at the Aptos Twin in the late 1980s, I got a call from the Area Manager (for whom I also was an assistant for at the 41st Avenue Playhouse), telling me that one of the storerooms upstairs needs to be emptied out. Didn’t matter what I did with what was in there, but that it all needed to go. Well, as it turns out, it was the poster room, and it had several thousand one-sheets from the 1960s and 1970s in otherwise immaculate condition (posters from National Screen Service were folded in those days), having been untouched since first use… if they even were used. An incredible treasure trove of artifacts from the era. It took two friends and I three trips in my 1964 Ford Falcon station wagon to get everything home. I have only one piece left from that entire collection, a one-sheet from the original Gone in 60 Seconds, for personal reasons, and there are times I still wish I had it, but that nights that followed, discovering and rediscovering all these older movies as I cataloged by hand everything I took home, was magical.

…And now I know where all those old one-sheets went!

Just read on Twitter that this place is closing on the 26th.

This theater is now closed. :–(