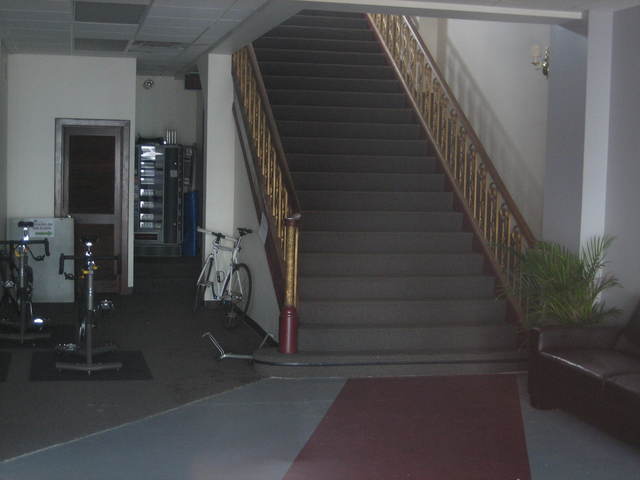 The Warner Theatre in West Chester opened on November 14, 1930 with the movie “The Life of the Party” starring Winnie Lightner and the Warner Bros. child star Davey Lee, billed as ‘The World’s Biggest Little Star’, who made a personal appearance on opening night. It was designed by the firm of Rapp & Rapp in flamboyant Art Deco style. The vertical sign and facade of the West Chester Warner was very similar in appearance to the Rapp’s Warner Theatre (now the Erie Civic Center) in Erie, which opened a year after this theater.

In June 1986, the West Chester Borough Council decided to allow the demolition of the auditorium, despite the efforts of preservationists to save the theatre, once known as the ‘showcase of Chester County’. Demolition of the auditorium took place in late-1986. The surviving part of the building has been the theatre’s facade and lobby. In December 1986, the West Chester Borough Council voted to allow the owner’s request to demolish the marquee, overruling the denial of the Board of Historic Review. The remaining front section of the former Warner Theatre building became local offices to the Philadelphia Inquirer newspaper.

In 2011, groundbreaking was held to build a 76 room Warner Hotel, with the theatre’s lobby building to function as the hotel’s lobby. The Warner Hotel opened August 17, 2012.

Does anyone remember the Eric movie theater next to the Kmart in the Goshen Shopping Center in West Chester, PA? What happened to the Eric chain?

Here is an interior photo from the Irvin Glazer theater collection:
http://tinyurl.com/n55qt5

I love that photo of the auditorium! What flamboyant decor!

Lost Memory; your photo link from 7/21/07 no longer works. Is there some way you can re-post it?

I have fond memories of the Warner. I went to my first movie on my own (sans parents) at the Warner to see Disney’s The Fighting Prince of Donegal. Later, in the early 70s, my high school English class was asked to leave in the middle of a special screening of The Lion in Winter which our English teacher had arranged for us.

I went to college in West Chester and seem to remember the Warner having a kind of art deco Egyptian motif. It was very impressive, at any rate. Movies were getting more permissive and much steamier when I was in college and I saw A Summer Place and Splendor in the Grass at the Warner. Both were the talk of the campus for days afterwards.

Theater’s lobby building to be lobby for 76 room hotel http://www.thewarnerhotel.com/

Actually the site has 6 beautiful color photos of the Warner’s interior, auditorium & what appears to be aspects from the lobby http://www.decopix.com/LR_DOA_Gallery-Final/content/West_Chester_Warner_Auditorium_NX_large.html

Almost positive that comments I posted in 2007 about the old Warner Theater here in downtown West Chester have been removed. Not happy about that. Will repost old memories later. But as to sendingoutansoso’s inquiry from 2008, yes, I do recall the old Eric West Goshen theaters. By the time I frequented it, in the mid-1970s, it had twinned. Or maybe it was always a twin theater. My guess is that it was a typical strip mall theater of the time – mid to late 1960s – and nothing terribly distinguishing about the theater. Imagine a typical strip mall theater of that era, and you’ve got the Eric Twin West Goshen shopping mall theaters. I recall seeing a second-run engagement of JAWS there in the fall of 1975. Or maybe JAWS had opened there in June or July of that year and had played all those months, as films often did back in those years, but my guess is it was a second-run showing. Not sure when the theater(s) closed. The Eric chain, based in Philly I believe as Sameric, went out of business for good in the 1990s. Anyone confirm that?