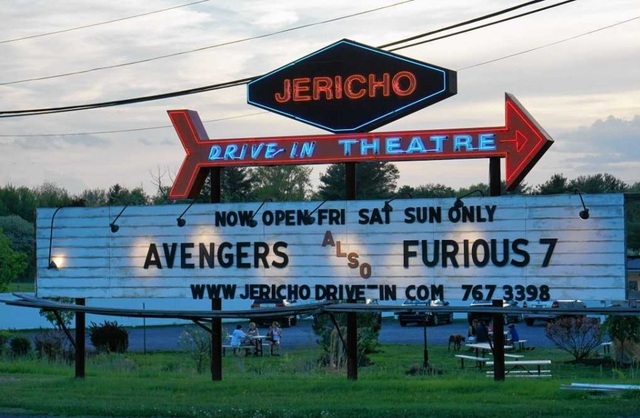 Went there in 2006 for the Fantastic Four movie. This place is really showing its age. The screen panels are collapsing, particularly on the lower right corner. The mens room was one of the filthiest I’ve ever been in. I will not be returning.

The screen has been replaced. The mens room still is odorific!!

Thanks for that info.

Drive-in Theatre owners should keep the Drive-in up.Most of the ones I have visited have been pretty dang clean.I think sometimes the Bulb could be replaced.

The Jericho has added an ice cream stand called Twist. It is accessible from inside the drive in or from outside.

They have a fundrising to convert to digital projection before the opening of 2015 season.

When they listed it at all, the International Motion Picture Almanacs listed the Jericho under Bethlehem, the town of which Glenmont is a hamlet. For at least 1961-76, the Jericho’s movies were booked by Brandt Theatres of New York City, its capacity was listed as 520 cars, and in 1961-66, its owner was Morris Klein. The drive-in didn’t appear in the 1959 IMPA and fell off the list by 1978.

Oval Pike wrote in 2012, “The Jericho opened in 1955, after two brothers bought the land from the physician who lived across the road.” DriveInMovie.com says those brothers were Morris and Raphael Klein, and the first corporation papers for Jericho & 9-W Drive-In Theater, Inc. were filed on Sept. 16, 1955. But everyone else agrees that the grand opening was on Flag Day, June 14, 1957.

Spotlight News wrote this year that current owners Mike and Lisa Chenette bought the place in 1995.