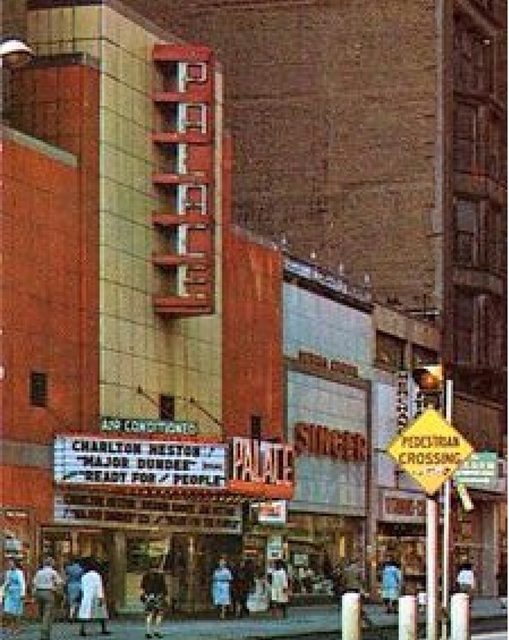 Originally called Lubin’s Palace, it was remodelled to the plans of architect Paul J. Henon Jr. in 1911. Philadelphia’s movie mogul Sigmund Lubin presented first run movies and top vaudeville at Lubin’s Palace until 1920. The theatre’s interior was remodeled to the plans of architectural firm Hoffman-Henon Co. in 1921, from a plain interior, to marble and brass gilt, a proscenium mural. The installation of a Kimball 3 Manual organ, which had the organ chambers on the stage behind the screen, put an end to vaudeville at this theatre. Upstairs were booking offices for the major vaudeville theatres in Philadelphia.

The Palace Theatre continued as a Center City movie showcase until the 1930’s when it became a second run movie theatre. Except for the Earle Theatre, the Great Depression put a stop to most of the first run movie showings on Market Street east of Broad Street, and the theatres became seedy. In 1945, the theatre was given a Streamline Moderne façade designed by architect William H. Lee.

The Palace Theatre closed May 31, 1971, as a last run movie theatre, and was demolished along with the News Theatre on the same block, as the entire block except for the PSFS Building, was replaced by the 1234 Market Street office building which opened in 1974.

The Apollo is featured in the 1981 movie Blow-Out, John Travolta’s character’s office is located above it, you get a good shot of it about ½ hour into the movie.

The front of the Palace Theatre can be seen at far right in this 1931 photo. The buildings between the Palace and 12th Street were then about to be demolished to make way for Howe & Lescaze’s Philadelphia Savings Fund Society building.

Bingo!, Joe. The Palace is the theater in the postcard I have. The perspective and depth of focus made it look like this theater was the third building from the corner. I looked at some photos on the Philly history site that showed the buildings on the South side of Market Street from 13th Street. But the buildings they showed didn’t go as far as the theater. When I saw the photos, the theater got further down the block from 13th St. One showed the Fairyland, but that wasn’t it. I just checked your link to the Palace 1931 photo, and this is it! The awning is the same and the building next door with the arched windows matched the one in the postcard. Thanks. Another one down.

Joe: That’s Greta Garbo’s head on the left side of the Palace, in the 1931 photo. “Inspiration” is playing. Search the site for “Market Street” and there is a great close-up shot of the Palace Theatre, probably taken the same day…

Joe (& theater fans everywhere…): There are many progress photos of the demolition and the construction of the PSFS Building, on the Hagley site. The Palace facade can be seen, also the East wall with a Palace sign painted on it. Great stuff!

The 1931 Palace facade photo is #26 on page 4 of the search results…just click on the Feb. 12 link and do a “Market Street” search on the Hagley site. You can see the Savoy across the street in the early construction photos.

The thing I remember about this theater is it had a turnstill enterance after you bought your ticket.

The TheaterBluff had to check in again with his politcal nonsense. FDR, Nixon, Rizzo? What the hell did they have to do with the Palace Theatre? The Palace Theatre, like so many other theaters at the time, fell victim to television, plain and simple!

With the closing of the Savoy across the street, the Palace inherited that theater’s all-night policy on April 25, 1952, showing “5 Fingers” and, for post-11 p.m. customers only, “Stations West.”