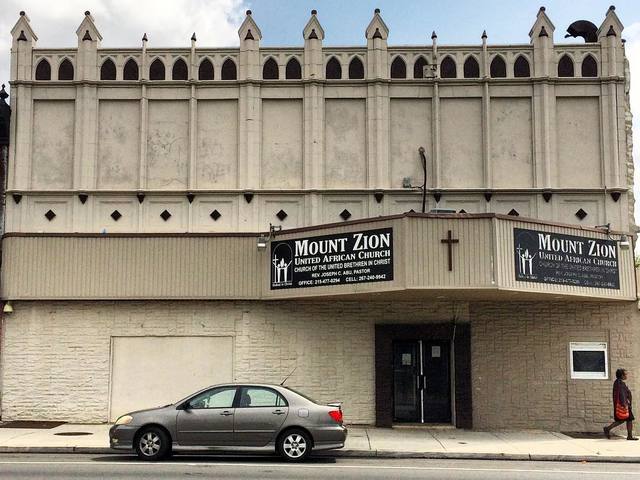 The Adelphi Theatre (not to be confused with the older legitimate house of the same name on Broad Street) opened in 1922. The theatre was located on N. 52nd Street near Media Street and seated nearly 500. After the theatre closed in 1965, it became home to a church.

This particular theater became a hall that catered events in the late 70’s. Also, south of this theater is a West Philadelphia land mark The Capital theater.

At this point in time, the capital is still being used as a retail space.

The number streets run north and south, while the name streets run east and west. This excepts Broad Street, which would actually be 14th Street. Also please note that if you ask someone to take you to East Philly, they will dump you in the Delaware River.

Here is a photo from the mid seventies:
http://tinyurl.com/253vnt

Here is a link to a video shot in the Church that now resides in the theater.

After the theater closed, it became a hall for banquets and weddings — called ADELPHI. The photo referenced by kencmcintyre shows that it was still a banquet hall on 12/27/2007 and that the vertical ADELPHI sign still towered above the marquee. Only later could it have become a church.

This CBS Sunday Morning news video about Daryl Hall and John Oates shows how they first met at what was then the Adelphi Ballroom. John visits starting at 2:34:

Affiliated Theatre Circuit launched the Adelphi Theatre in 1938 using the architectural plans of David Supowitz which converted an automobile showroom.