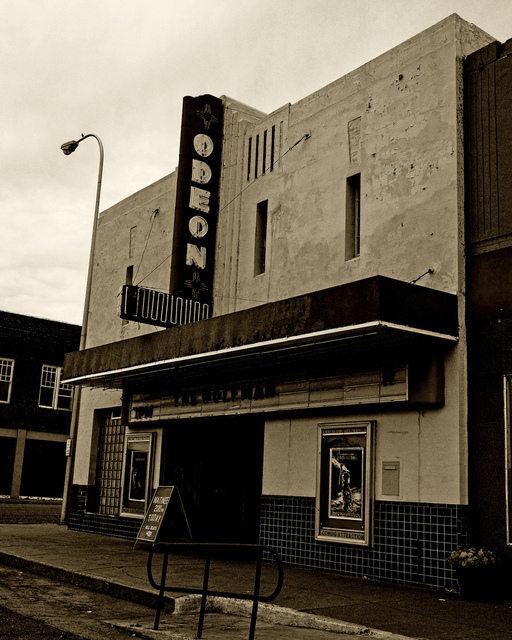 Built in 1935, this old white front Art Deco style theatre is still in operation. Single screen, seating 696 in orchestra and balcony levels. The theatre has a squared marquee with no attraction panels but has a good sized vertical in all red like the marquee with white neon lettering spelling out Odeon. The Odeon plays first run attractions. It was listed on the Register of Historic Places in 2008.

Due to the owner retiring, the Odeon Theatre was put up ‘For Sale’ in the fall of 2010. It was reopened under new owners on April 29, 2014. It was closed on March 15, 2020 due to the Covid-19 pandemic. Refurbishment was carried out and it reopened in early-September 2022 using the orchestra seating area only.

My photograph of the ODEON.
www.flickr.com/photos/lastpictureshow/287729032/

A 1988 view of the Odeon Theater in Tucumcari.

Just read in the local paper that in April 2016 Tucumcari will be celebrating Rawhide Days, in honor of the classic TV western series. Location filming for the show took place near Tucumcari. The Odeon Theatre has offered to screen episodes of the series on their big screen. Series star Clint Eastwood has been invited to attend.

Historic Route 66 gets all the attention in Tucumcari, while its nearly deserted downtown has one bright spot: the Odeon. Recent pics posted in the Photo section.

On a visit to Tucumcari on Saturday 13th August 2022 I was fortunate to be able to meet current co-owner, Christy Dominguez, at the Odeon. She told me that she and her husband, Robert Lopez, a local farmer, had acquired the Odeon in March 2013 from Ramon Martinez. It was open at that time, but they closed it in September 2013 for refurbishment and the installation of a digital projector and a Dolby 7.1 sound system. The Odeon re-opened in January 2014 with children’s favourite “Frozen”.

Sadly, the Odeon was then forced to close on 15th March 2020 due to the COVID-19 pandemic. The opportunity is being taken to carry out a further, much more extensive, refurbishment, and it is hoped that the Odeon might re-open as early as September 2022. This will be stalls-only (220 seats); it is unclear whether the circle seating will be brought back into use.

Christy also informed me that the Odeon had been built by the owner of the nearby Princess Theatre, a much grander venue which presented vaudeville in addition to the films, as a fairly ‘basic’ ‘films only’ theatre “for the common man”!