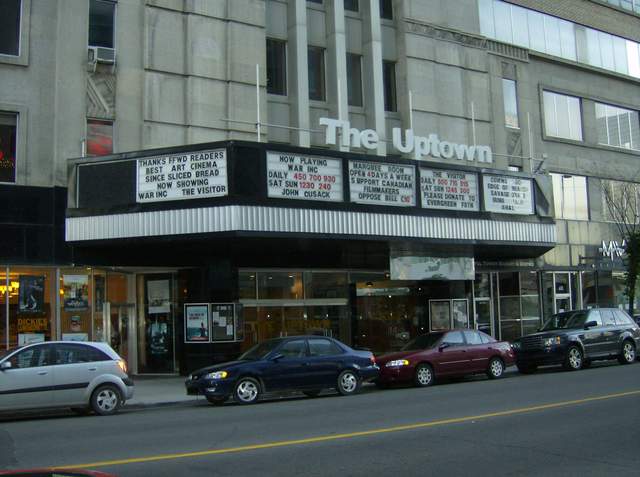 The Odeon Uptown Theatre in downtown Calgary, in the Barron Building, was opened on March 30, 1951 by Jacob Barron, owner of the National Theatres chain of cinemas as its flagship theatre. The opening movie was “The Mudlark” starring Irene Dunne.

The theatre was built in the late Art Moderne style and is one of the finest examples of the architectural style in Calgary. The lobby of the Odeon Uptown Theatre has been compared to the Art Deco/Moderne buildings of Miami Beach. It was twinned on March 23, 1973.

In 1993, the theatre was remodeled and restored, and the former balcony, which had been converted into a second auditorium in 1973, was made into a small stage area for live performances.

Additionally, the main auditorium was completely restored to its original appearance, including the restoration of plaster torches on each side of the large screen and brocade curtains (which opened before the main feature). As a gesture to the expectations of modern audiences, 100 seats were removed from the main auditorium to expand legroom for all patrons.

The Uptown Theatre specialized in art and foreign film, and presented new Canadian short features before each main presentation. It stopped screening movies in 2012 and went over to live theatre use. This closed in 2013.

Highlight for me with this house was Funny Thing Happened on the Way To The Forum.I loved that movie and still do.Must have been 1967?I remember going to a doctor in the bldg.next door.The interior was fairly severe.

The architect of the Uptown was John A. Cawston, of the firm of Stevenson, Cawston & Stevenson.

Here is a brief essay about the Barron Building, courtesy of the Calgary Public Library.

Here is a decent picture of the Barron Building, taken during the time the theatre was closed.

It’s a travesty that it lost its spectacular marquee for the spartan utilitarian one it sports in the into photo. I wonder if the interior is just as disappointing?

1951 grand opening ad uploaded in the photo section. It stopped showing movies in 2012.

This needs to be marked as closed as it’s no longer open and is currently (summer 2014) undergoing redevelopment as either offices or condos. It’s not being demolished, however.

The former Uptown Theatre in Calgary has just been sadly demolished last week.