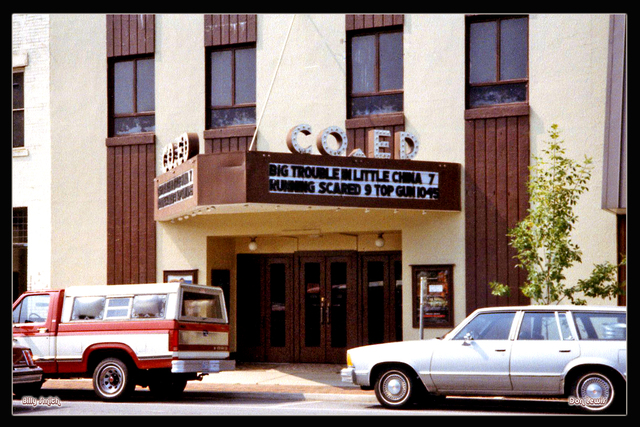 The small Co-Ed Theatre was opened on June 26, 1939 when it had 400 seats. It is located on the corner of W. Main Street and 64 next door to the Ace Hardware. This Art Deco style house is a really nice attractive theatre.

The exterior is done in a mint green with large black diagonal stripes running down the front. A triangular-shaped marquee with the theatre name in neon on each side. It has a small quaint free-standing box office in the middle front entrance.

I attended college in Brevard in the 1970s. There weren’t just a whole lot of entertainment venues, but we did visit the Co-Ed Theater regularly. A lot of the movies weren’t first run at that time. I remember seeing “Patton” several years after it won Best Picture. My mother also attended college in Brevard. Her memory of the Co-Ed was the special showing of “Gone with the Wind” for students. That would have been in the 1940s.

I ran the Co-Ed from 1982 til 1998 and the information regarding seating capacity is wrong. The single auditorium never seated more than about 336. I twinned this theatre in 1989 and had one house with 136 seats and one with 132 seats. When I lost the lease in 1998 the new operators in their infinite wisdom tore out $50,000 worth of remodeling and went back to a single screen? Go figure! When I owned this theatre it was first run and did respectable business. Now the place is almost always deserted.

By the way a couple more things I remembered that need correction, the Co-Ed has never had a balcony. It has a tiny 6 six seat box off to the side of the projection booth, that became a hallway to booth number two when I twinned it. It also had a crying baby booth with glass window that seated four people. That is now gone as the new owners put a handicapped restroom in that location. The theatre is now owned by an independent operator that used to work for Universal Pictures Atlanta office. When I twinned it I used the original Simplex E-7’s that were in mint shape. The new owners threw them in the trash and installed a Cinemacaneca. Those old E-7’s did in fact show Gone With the Wind and everything at the Co-Ed from its 1937 opening until the new owners took over in 1998. What a crying shame to get rid of such classic pieces of equipment.

Yeah unfortunately they changed it to the Falls Co-Ed Cinema. Just had to change things.

The Co-Ed Theatre was designed by architect Erle G. Stillwell, according to the January 4, 1947, issue of Boxoffice Magazine.

The architect’s first name is spelled Erle, not Earle.

Henderson County Public Library has his papers (and the correct spelling of his first name.)

Correct address is 79 West Main Street. Confirmed via their active Facebook page below.