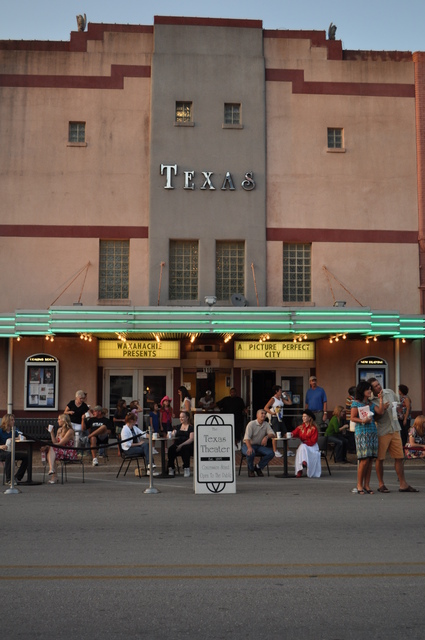 The Texas Theatre is located on the N. Side Square. This Art Deco style theatre was last operating as a live performance venue.

A striking two-story front done in a cream color and burgundy stripes along the top and above the marquee. There is a large grey/green panel down the front center of the building with blue lettering spelling out “Texas”. It has a small compact lobby and concession area. The auditorium is large and spacious.

The Texas Theater reopened on May 1, 2009. The web site is www.TexasMusicTheater.com

Robb & Rowley took over the Dixie Theatre in 1927. The previous owner had been P.Q. Rockett, who had bought the house in 1914.

The earliest mention of the name Texas Theatre I’ve found in Boxoffice is from the May 9, 1942, issue which said the house had reopened in an improved state that week after having been damaged by a fire earlier in the year. At the time it was R&R’s “A” house in Waxahatchie.

Chuck, the link to my photo you posted above takes you to the photo that is featured in this years Waxahachie Phone Book! Thanx for adding the link..
Randy A. Carlisle
Historical Photographer

Chuck.. You & everyone is more than welcome. And, I thank you for your kind words. It is very much appreciated…
Photography is something I love to do & I love sharing them with all my Friends.
My Best to you and all..
Randy

And, just to note, Waxahachie had a Drive In Theatre also!! It was known as the ELLIS Drive In Theatre. Seen here:. View link .. is the Marquee, that still stands today!! I have a cpl of updated shots I took a week ago and you can actually see the ole Marquee even better. Still standing the test of time.. I’ll post them shortly on flickr..
Thanx alot!
Randhy

Chuck1231 – If you type in 1600 Mulkey Road, Waxahachie, Tx in the search box of google-maps, you’ll see the outline of the Ellis Drive In Theatre… Mulkey Road is another name for Bus.Hwy. 287.. On the North-east side of the road, there’s a building (Lower right) that sits right next to the land of where the Ellis Drive In once occupied.

Chuck1231 – Favor please sir. See, if you would, what you can find out about an Empress Theatre & Rio Theatre, both in Waxahachie.. I have a photo on flickr of what was the Empress but nothing on the Rio as of now..

I also have a Nice B&W copy of the Ritz Theatre I got from the Ellis Co. Museum.

Thank You sir for your time! Randy A Carlisle 8-)

Sad to say but the Texas Theatre has closed its' doors. It’s been closed for about 3 weeks or so. The website does state CLOSED-FOR NOW……

This web page has a detailed history of the Texas Theatre, including all of its previous names. Here is the gist of it, with the important dates and name changes:

A movie house called the Theatorium first opened in part of the building on February 15, 1907. In 1908-1909, it was expanded, and reopened on January 18, 1909, as the Majestic Theatre. In 1912 it was renovated and reopened on July 31 as the Dixie Theatre. By the mid-1920s the house had been expanded again, this time upward to add a balcony. Operation of the theater was taken over by Robb & Rowley in September, 1927.

The Dixie Theatre closed in September, 1934, and the interior of the building was gutted and completely rebuilt. The house was reopened as the Ritz Theatre on November 23, 1934. This was the first time since construction of the building in 1887 that the facade was also completely remodeled. Four years later the Ritz Theatre was destroyed by a fire on December 3, 1938.

The Texas suffered another significant fire on February 15, 1942, and was rebuilt again, reopening on May 1. Both the 1939 and 1942 rebuilding projects were designed by the Dallas architectural firm of Houston & Smith.

Since May, 2009, the Texas Theatre has been owned by the City of Waxahachie.

Here is something I originally posted on the Ritz Theatre page, but as that page has to be about the second Ritz and the article is about the destruction by fire of the first Ritz it belongs on this page. The article was from Boxoffice, probably December, 1938, but I failed to note the issue date:

“DALLAS— Robb and Rowley’s comparatively new Ritz Theatre in Waxahachie is a mass of total ruin after a fire thought to have originated in the balcony. The house had just recently been remodeled. Nothing was saved and the loss is around $50,000.

“Additional loss was a new and late model sound equipment stored in the Ritz building, which equipment was about to be installed in the Empire, ‘B’ house. ‘A’ bookings will be shown in the Empire temporarily, it was said.

“R&R officials have been extremely busy discussing plans for a new theatre, details of which were not made known at this time.”