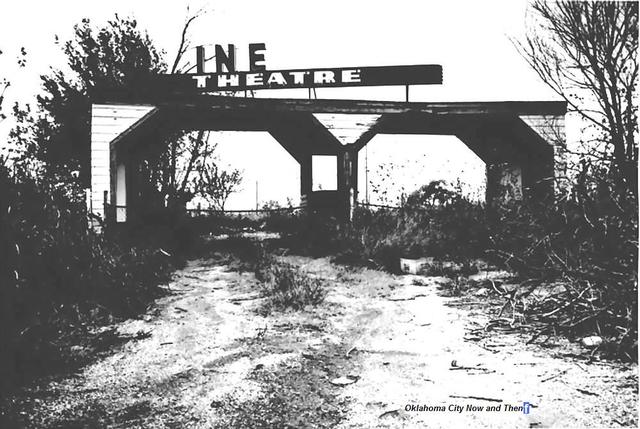 The Circle Drive-In located in Oklahoma City opened in 1949. It was closed by August 1965 but briefly reopened as the renamed Cinema C Drive-In in 1967. It had a capacity for 500 cars.

This opened as the Circle Drive-In on April 2nd, 1950. Grand opening ad in the photo section.

Odd name!! Was there a Cinema A or Cinema B drive-in as well?

The address listed is incorrect. A more accurate address for this theater is 8300 NW 10th St. Oklahoma City OK 73127. This is further east. Now housing.

Does the c in Cinema C stand for anything?

“Ferris said the merged companies plan to remodel all of the former Barton theaters at a cost of more than $500,000. The remodelling will begin June 12 with the closing of the North Penn Twin and the Cinema 66.”

The June 5, 1954 Motion Picture Herald reported that Barton Theatres had acquired the Circle drive-in. “Mr. and Mrs. Harold Combs are managing the theatre temporarily. This is the 15th theatre in the Barton chain in Oklahoma City.”

I’m a little surprised that nobody here has asked what circle this drive-in was originally named after. The answer is that it was named for its builder, Harry Circle, who also owned a couple of Circle Grocery stores.

Although I haven’t found proof, my guess is that the Circle opened in 1949. It was in the 1949-50 Theatre Catalog, which would have been published in late 49 or early 50.

The April 15, 1950 Motion Picture Herald had one sentence referencing the ad that rivest266 uploaded: “The Circle drive-in theatre opened Sunday, April 2, for the 1950 season.” That’s how a magazine would present a season opener, not a grand opening. And look at the ad itself - nothing about it suggests that the Circle is new.

Anyway, the owner listed in the 1952 Theatre Catalog was W. J. Nethery, a former public school teacher who apparently dabbled in real estate. That’s probably who sold it to Barton in 1954.

In April 1955, an 80-mile-per-hour windstorm knocked down the Circle’s tower. Barton took the occasion to replace it with a wide screen, reopening in May.