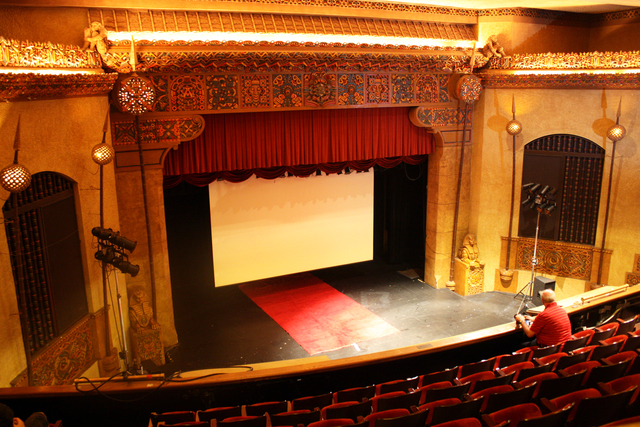 A rare example of African Deco/Egyptian.Spanish Baroque styling (which featured African shields and spears, sphinxes, and chimpanzees), the 1,200-seat Walker Theatre was conceived by Madam C. J. Walker, America’s first black millionairess, after she was charged a higher price to attend another downtown theatre because of her race.

Walker died in 1919, before the theatre was finished, but her daughter A'Lelia completed the theatre in her mother’s memory. The Walker Theatre was opened on December 26, 1927, with 1,500 seats. The theatre building also contained the Indiana Roof Ballroom, Casino Ballroom, beauty shop, pharmacy, and coffee shop. It was equipped with a Barton 2 manual 6 ranks theatre organ. The Walker Theatre is located in the heart of the African American community, Indiana Avenue, an area which was famed for its jazz halls.

By the 1970’d the theatre was in closed and in disrepair, being used for storage. The Barton theatre organ had been removed from the theatre. In 1979 plans were proposed by a group of concerned citizens to rescue the theatre from impending demolition. As part of the refurbishment, the stage in the Casino Ballroom was demolished to enlarge the room. Restoration work on the theatre began in 1982 and was completed for its reopening in October 1988 with a gala performance by featuring The Jimmy Coe Orchestra, actors Rosco Lee Brown and Rosalind Cash, entertainers Isaac Hayes & Gregory Hines and “Roots” author Alex Haley. It was renamed Madam Walker Theatre Center with a reduced seating capacity of 934-seats. The former Casino Ballroom now operates as a venue for jazz performances.

There were plans to install a theatre organ, which will hopefully be the original Barton Organ that was removed long ago.

In 1991 it was designated a National Historic Landmark.

This theatre opened around 1927 and the architects were Rubush and Hunter.