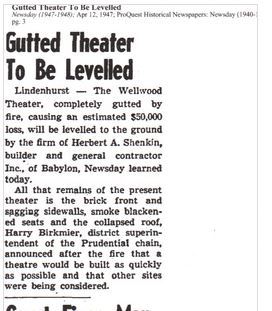 Located on S. Wellwood Avenue diagonally opposite Our Lady of Perpetual Help, Roman Catholic Church. Ground was broken for the National Theater on October 13, 1913. Built at a cost of $4,500 by local businessman Edward Gleste, it was to be a venue for both silent films and live performances. The theatre opened on December 27, 1913.

After operating under several owners, and a change of name to Wellwood Theater, the theatre was acquired by the Associated Prudential Theater Circuit on November 24, 1941.

Although the structure had been constructed to be as nearly fireproof as possible, it burnt down an hour after closing on Easter Sunday, April 7, 1947.

I had a cousin John, now deceased, who was able to pull a reel of film from the rubble. I believe it was from “Tarzan’s New York Adventure”. After my cousin’s passing that reel no longer exists.

Checked with my cousin re the Wellwood theatre fire pictures. They didn’t make the cut when she moved to California. Maybe I’ll try the Library or the Museum.

The theater was 30 x 100 and reported to seat 500. That figure is impossible considering the dimensions and the fact that there was a stage. A more realistic figure would be the 350 reported in the 1941 and 1943 Film Daily.

Floor was sloped concrete. As a child I remember the marquee as being boxy with the name in red neon lights. There was also neon around the sign boards.

Interestingly the theater was destroyed after the Easter 1947 show. The new theater opened (Lindenhurst, elsewhere on CT) on Christmas 1948.

Uploaded copies of photos from the historical society of the marquee, the fire and as the National.

According to “History of the Motion Picture Theatre in Lindenhurst”, published in conjunction with the fifteenth anniversary of the Lindenhurst Theater (see elsewhere on CT), the building was heated by steam, had a semicircular stage with two side wings with dressing rooms. The front vestibule and ticket booth were under the projection booth. Prior to the erection of the National movies were screened in public halls in two of the hotels in the village. Members of the orchestra which provided musical background for the silent movie on opening night were paid the nominal compensation of one dollar.

Supposedly seating was for 500 people, unlikely in a one story 30'X 100' building that had a stage. Wonder where the bathrooms were.